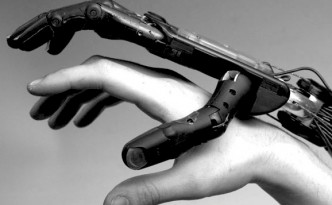 Think good thoughts about a sunny side

Apparently I am a robot.

Sometime over the last few weeks, Google launched a new captcha system for its Blogspot subsidiary. The idea, as I understand it from the blog posting announcing it is that most people won’t see captchas at all. For these trusted travelers of the internet, all they have to do is check a box that says “I am not a robot”, and magic happens.

But not for me. Checking the box gets me a Rorschach blot, in which I am supposed to discern letters to type into the provided box. Wrong! Try again! With a new image!  Somewhere behind the curtain Google psychologists are cackling at the disturbed mentality my feeble attempts indicate. They’re certainly getting plenty of data: not counting myriad refreshes to get rid of the least readable ones, it’s taking me ten to 15 tries to achieve humanity. The net effect is like taking an eye test administered by Franz Kafka that, if you fail it, will require you to take it again.

In the blog posting linked above, only the sunny side of captcha life is reflected. Google boasts that on the services that have adopted the new system 60 percent of users are getting right through. The fact that life is now hell for the remaining 40 percent appears nowhere. For mobile, the posting shows bright, clear images, from which you select as directed. For a situation like mine, the posting shows an entirely misleading test with three numbers. Numbers! I would kill for numbers! I can do numbers!

Instead here’s one of the many images I was supposed to decode this week: 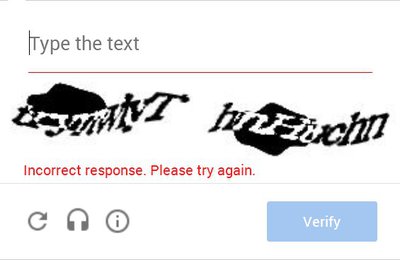 One of the blogs where this is happening is one where I’ve posted comments near-daily for three years from the same desktop computer at the end of the same IP address. You would think a really smart system would know this.

After you find the axe and kill the captcha you still have to fill in the little form to identify yourself via one of a number of options of ID: Google account, OpenID, name/URL, and so on. I don’t know why that doesn’t come first; you would think that matching those answers with their usual IP address or browser fingerprint would be a useful clue. Instead, I suspect my inability to solve the new captchas easily is working against me. Inside, the API is probably programmed like this: “Took ten tries last time. Probably a spambot that got lucky. Better make it harder this time.” Or, possibly, all the add-ons I have fortifying my installation of
Firefox against spies and invaders are messing up the system. In most tests involving cognition, you can learn to do better through practice. This, however, requires either a trial set you can practice on or feedback. Unfortunately, presumably because Google does not wish to educate the spambots, I can’t study my past failures and learn from them. It would be helpful, for example, to be able to compare the image, my answer, and the correct answer  so I could see if I’m trying too hard to see letters in stray squiggles, or whether all those things I think are w’s are actually twice as many v’s. Instead, each fresh attempt is a reset to a state of original ignorance.

Even without specific feedback, spambots are getting better, which is of course why all this is happening. Despite a few annoying stumbles at the beginning, the last iteration of captchas were difficult but solvable within three or four tries. I can’t imagine reaching that state with these new ones.

Was my eventual guess at the captcha pictured above even close? I will never know.

Clearly, ten minutes of daily frustration is not comparable to the grief Facebook’s year in review graphics caused to myriad bereaved people, most notably web developer Eric Meyer, who called it inadvertent algorithmic cruelty (there’s also a follow-up  discussing the widespread reaction to the posting). But there seems to me a common root – not, or not solely, the thoughtlessness of programmers, but the relentless cheeriness characteristic of American corporate presentation going all the way back to Dale Carnegie and How to Win Friends and Influence People. Technical documentation, for example, tends to be written as if the software or hardware you’re installing will function perfectly, just as American supermarket cashiers must be exhaustively perky, Christmas is always a happy time, and the elderly couples in American TV ads are all healthy and mutually devoted (especially once they’ve achieved a potent peace of mind by buying Cialis and funeral insurance). Living on a steady diet of upbeat, it’s perfectly logical that Facebook’s and Google’s programmers might not have noticed the negative aspects of their decisions.A related posting to Dave Farber’s list a few days ago noted that missteps like Facebook’s will become increasingly uncommon as social bots continue to improve, concluding. “We may soon prefer to ‘friend’ bots on Facebook rather than actual people.”

We may have to. Because at this rate, bots will be the only ones that can pass the “I am not a robot” tests.

Wendy M. Grossman is the 2013 winner of the Enigma Award. Her Web site has an extensive archive of her books, articles, and music, and an archive of earlier columns in this series.  Stories about the border wars between cyberspace and real life are posted occasionally during the week at the net.wars Pinboard – or follow on Twitter.

Previous: Cybersalon investigates: Gamergate
Next: 27 Jan 2015: The Future of the Dark Net in Summary