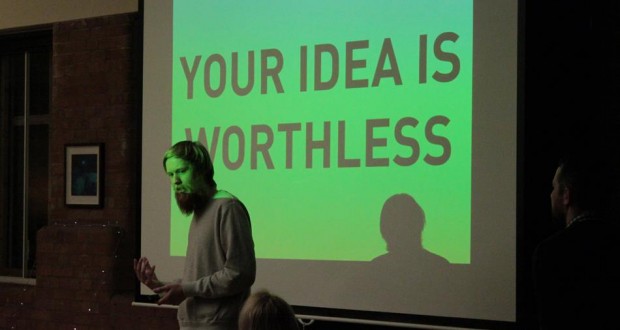 We are back!  After 5 years of self-imposed digital exile Cybersalon has returned to London’s digital scene with the first evening of talks, discussions and networking over wine and Polish beer on 30th January 2013.

Our first meeting  was focused on commercial web design from Antirom and Tomato to the Silicon Roundabout.

It took us a few months to find the right venue as the digital scene has moved so far East (of London) that our old haunts in Soho were just not going to cut it in 2013.  It was then very fortunate for one of our frowners, Richard Barbrook to bump into Rob de Renais from Arts Catalyst who recognises quality when he sees it and offered us his humble abode at Arts Catalyst to host our ‘come-back’ series of talks at his warehouse on Clerkenwell Road. The place has a good vibe, decent network and a great pub nearby which was pretty much all that was needed for a good Cybersalon location.

For the first session we were very lucky to host luscious Laura Jordan from Dare Digital. Laura talked about her first Internet ‘moment’ when she was still in Australia, age 17 and drove by a poster with Rosie Cross (now iconic) with her call to arms  with “Girls Need Modems!”. Rosie has also called for the girls to “put down your pony and pick up a computer” which Laura followed without and landed in a place where she found the Future had suddenly became Present, just as the Internet has exploded in 1994.  She explained that modem was a little plastic box that you had to plug into the phone socket  to connect your computer to the Internet, that it was extremely challenging  task to use. It was a real IQ test as the device came equipped with an especially devious personality and a mission to ruin your life by falling over every 10 minutes or so, usually in the middle of a hot chat with some fascinating on-line date from two continents away.

Laura’s digital destiny then took her to London, where her extraordinary creative design talent has been spotted straight away (she started off at cutting-edge creative agency Lateral, moved to Glue Isobar, LBI) and she now leads a gloriously clever team of mind-blowingly creative youngsters as Creative Director at one of the top digital agencies in London, Dare and Vice President of D&AD.

She has not forgotten Rosie’s call to arms for the digital sisterhood and later on founded a girls-in-tech support group called SheSays, an organisation that educates, promotes and inspires women to take up digital creative careers. And made a steady chink in the wall of chromosome X that surrounds the heart of the digital action with Shout, a way to collaborate and earn money through the female network,  coming out of that initiative.
We were doubly delighted to host Laura as Cyberia Café hosted one of the early Cyberfeminist events with Francisca di Rimini and Laura back in 1995. It was sheer joy to see Laura again and getting up to speed with her current new big challenge of pushing boundaries in making the Net work for the top global brands.

Laura’s fascinating spin through 15 years of digital adventures across two continents was a hard act to follow, but Jim Boulton from Digital Archeology rose to the challenge. Jim came to the Internet via the Hypermedia Research Centre at Westminster University, exploring the new powerful new medium. Before the Internet Jim was busy designing ergonomic solution for the Post Office, with the pinnacle of his pre-Net career being the initiative to turn the car tax discs from round to square. That had blown the mind of the PO managers and Jim became an ergonomics fugitive, landing a little while later in the adverting business which has embraced him and his somewhat unconventional approach to digital design with enthusiasm (Store agency and others).

That is where he noticed that digital design is actually a very ephemeral creature. The back compatibility of operating systems became a thing of the past with the breath taking speed of tech platform change. Many weird and wonderful early Web works were becoming known only as legends as they were impossible to see and use on the newer platforms. Particularly the change of the architecture for the chip design in Mac around 2006 resulted in no back mirror view of the past works as nothing created before has now worked on the newer machines.

Jim’s view was not just technostalgia, but the strong conviction that those early Web works and CD-Roms should be preserved for the future generations as the Internet was young only once and the new waves of designers would benefit from the knowledge of what was happening before and why Shockwave has disappeared, how Flash was used and the excitement we all felt at seeing the first animated gif on the Home Page.

Jim has then painstakingly rebuilt a good collection of antique computers with their relevant operating systems. Via E-Bay and dodgy dealing he has gathered a very representative group of computers, taken it to New York to show the folks there how things were done in the ‘Early Net Years’. The project acquired a name of ‘Digital Archaeology’

and is developing at a good speed under Jim’s tender and loving hand. He got so excited about the detective work required for such a reconstruction that he is now doing it full time from his ‘arable defendable land’ abode in the wilderness of Norfolk. A great project that deserves to be shown permanently somewhere somewhat more accessible so please get in touch if you have any creative ideas how to help to present the collection to folk in London.

Craig is fighting the New Design battles on the fields of mobile and tablet computers. Those battlefields are daily soaking the blood of many a young designer as the requirements to create pages that are actually useable by all (or at least most) devices out there in the big wild world is a massive challenge.  Craig was showing his design scars and wounds but also sharing his tips on the survival in the new multi-device jungle.

He talked about the need for more awareness of screen ergonomics, more disciplined design culture that develops for the end-user and not for themselves (which was a thinly-veiled criticism of the ‘old skool’ self-indulgent design, acknowledged by Jon Bains (ex Obsolete/Lateral) during the Q&A session).

In the early phases of the creative Web projects the commissioning client/brand quite often had no actual knowledge of the medium and the designers were able to get away with ‘messing’ and designing Websites there pleased the designer rather than the audience or the end user. Craig emphasized that those days are well and truly over as the brands have gotten smarter and can’t be fooled anymore or made to feel inferior by a ‘cutting edge’ young Web guru.

The discussion after the talks emphasised the professionalization of the Web design industry but also the fact that the designers had to learn to contain their wild ideas and instead concentrate more on the actual poor sod at home who has to navigate his way through often hellish early Web sites (some of them impenetrable without Ariadne string). Today the process is perhaps harder, but produces cleaner and more practical Websites than in the first 15 years of the medium.

We have finished our Then and Now musings by noticing that the Web has moved forward with more clean structure, speed and clear navigation, but has also taken a couple of steps back as visual creativity has been somewhat restricted by more stringent requirement of the multi-device Web publishing. The evening has finished with call for old computers, cameras and kit that would be great to show as a part of Then and Now digital technology exhibition under development by Cybersalon.

Previous: Has Social Media Lived up to its original promise?
Next: Media Art Then and Now: 27 March 2013