I recently attended the Wikimedia Science Conference in London. My first reflex was to count every single woman that walked into the room and stayed. I lost count, but although it wasn’t an overwhelming amount and not close to half of the attendees were female, the turnout was still pretty good, I was happy and satisfied to see that women were interested and that they were there. I even tweeted about it and got a response from a fellow female full of encouragement. 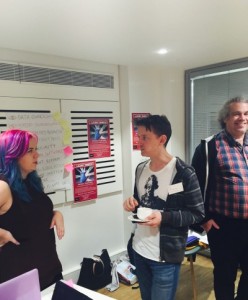 During lunchtime however, a conversation between two women involved in technology made me think.

One of them stood by the opinion that Wikipedia is not an inclusive enough environment for women to feel welcome and free to participate. The other one felt that it is up to women to include themselves, and that we should just get on with it and do it.

Now my first reaction was “Surely we should change Wikipedia in order to include women…” and then I thought about it some more, because does anything ever change just because we want it to change? It is fair to say that Wikipedia is aware of the gender gap, which is slowly decreasing up to 8.5% this year from last year’s 7% (however the exact number is difficult to establish due to the fact that a lot of user names are non-gendered and users are free not to disclose their gender) [1].

I have participated in one Wikipedia edit-a-thon and have made a couple of edits here and there and created and contributed to a couple of pages. I started editing through a module at Middlesex University co-ordinated by my tutors Dr Sophia Drakopolou and Stefan Lutschinger, and thanks to the university’s close work with Cybersalon I volunteered for the edit-a-thon for the UK General Election where I met a lot of very welcoming and encouraging people. This has happened over the past six months. And maybe that’s not enough time, and maybe I have been lucky enough to be given the opportunity to do it in a safe environment, but I haven’t experienced any sexism yet (I don’t expect to experience any, hopefully I won’t, but as with all things, you never know). So what does my experience teach me?

I decided this year that I wanted to do more things. Those things happened to all be involved in the world of digital and technology, and one of those things was editing Wikipedia. I registered, with a non-gendered username (not on purpose) and edited a couple of things. I took part in the edit-a-thon for the British General Elections. There were four women in the room, including myself, but nobody came up to us to tell us we don’t belong. In any of the comments that have been left on my pages or edits nobody has ever said to me “ Go away woman you know nothing”. When my pages were patrolled or proposed for deletion there was no mention about my gender and as soon as I edited and referenced I was thanked for my work and contributions. I felt like an equal and I knew I was because I wanted to be there as much as every other person in the room, I wanted to take part and contribute. And thanks to that I plan to participate more in subjects that I find interesting and such as digital activism and feminism as well as anything that I might come across and find interesting. 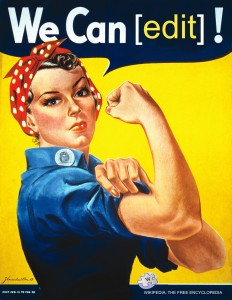 “Where am I going with this?” you might be asking yourself. The point is, I wanted to do something so I went and did it myself. Yes it is general knowledge that women are not being as included in the digital world as men are, and that it is harder for us than it is for them. But did that stop me? No. My point is that I just went and did something that I wanted to do, despite the societal norm, despite the majority of the environment being male.

And maybe that’s the thing. Maybe what we should be doing is exactly that, just doing. Do you want to be a rocket scientist? Go and get a degree in physics and work your ass off. Do you want to work in computing? Go and study computing and teach yourself coding and get a set of skills that will enable you to get a job because you are the best candidate for it (whether you are male or female).

Maybe we should all just start doing more. Nothing happens just because, society doesn’t change because we want it to, society changes because we go and do something about it. So maybe we should be setting example with our actions.

I’m not saying we shouldn’t be talking about these problems, and that we shouldn’t be addressing and fighting the patriarchy. What I am saying is that as well as doing that some of us should just go and make the changes that we want to see happening ourselves. And then our society will start adapting to us, but we need to make space for ourselves first.

Disclaimer: I am a feminist, and very aware of the fact that what I’m talking about here is from the position of a privileged white female in a first world country. Problems of lack of opportunity and education in third world countries have a completely different set of circumstances that need to be addressed in a completely different set of words.

Here are some pages that I have either edited or created:

Previous: Hack the Future – September 14th 2015
Next: Smart City – are we repeating the past?