Don't Miss
Home / Writing / The Snooper’s Charter is back

The Snooper’s Charter is back

After being repeatedly repelled during the last coalition government, the Communications Data Bill, also known as the Snooper’s Charter, is back to haunt us yet again. Since the Conservative victory in the polls earlier this year and without a deterrent in the form of Liberal Democrats, the hugely controversial surveillance bill is firmly back on the government’s agenda and expected to be enacted by this time next year.

The renewed debate follows the publication of the government’s “Counter-Extremism Strategy” which will impose new responsibilities on internet service providers and require the “industry to strengthen their terms and conditions, to ensure fewer pieces of extremist material appear online.” It will also place a requirement on communication service providers to collect and retain customer usage data, such as browsing activity, email, voice calls and phone messages for 12 months and make it available to state authorities.

Despite calls for an overhaul of the law regulating the interception of communications in two major reports published this year (David Anderson QC and RUSI’s) and strong opposition from privacy campaigners, the new bill is expected to award the spy agencies a “dizzying” range of surveillance and hacking powers.

One of them will be the ability to take remote control of a device and access its every area. The bill will also empower the agencies to install eavesdropping software onto computers and smartphones. 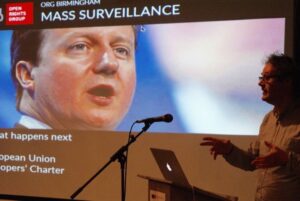 These are just some of the new extensive powers that threaten our fundamental freedoms, according to Jim Killock, the Executive Director of Open Rights Group, who spoke on the dangers of Snooper’s Charter to a packed room in East London’s Newspeak House on Monday 19th October. By highlighting cases of police being able to use the RIPA to discover journalistic sources, Killock warned that judicial authorisation is crucial to avoid further abuses. He also touched upon the new bill’s incompatibility with the EU law and how it is going to impact the debate on Britain’s membership in the union.

The provisions of the new bill raise fears that the CJEU judgements, which state that surveillance measures must be limited to a specific purpose, require a robust, independent authorisation and the collected data must remain within the control of the EU, will be compromised.

Despite Home Office’s assurances that the bill is intended for targeted surveillance as opposed to ‘fishing expeditions’, the sheer magnitude of the collected and retained data will likely attract cyber-attacks. As early as in 2012, a Liberal Democrat peer, Lord Strasburger, described the proposals as a “honeypot for casual hackers, blackmailers, criminals large and small from around the world, and foreign states“. Besides, the inadequate wording of the filtering arrangements risks allowing the authorities to build an complex and unprecedented database on each and every individual it deems a threat. 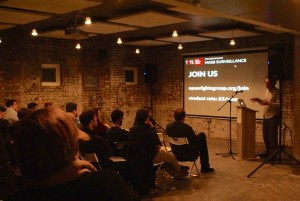 However, the security agencies justify the need for such far-reaching measures and claim they are crucial for them to be able to continue protecting the country from internal and external threats. They argue that while the amount of data keeps increasing, their powers are seriously diminished by their inability to access and examine encrypted communications of alleged criminals.

Killock, however, warned that citizens must oppose measures that will result in indiscriminate collection of data by the state without jeopardising the work undertaken by security agencies. He said: “We have to be very worried about the extension of police powers. If the powers the GCHQ have continue to be permitted then we have to be willing to challenge this afterwards through courts and politically. But ultimately, we are only going to resolve this politically. We can get the court to tell the government they’re doing the wrong thing but ultimately it has to be about a political will and that means people need to understand there is a problem.”

Killock also urged the audience to spread awareness of the bill by writing to their MPs, speaking to their friends and get involved in local campaigns.