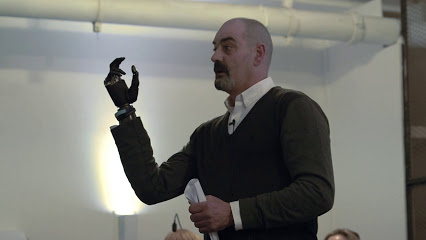 This is a kids’ song that my son often hums while building his elaborate Lego contraptions. I never spent any time thinking about the words until I met Nigel Ackland at the Cybersalon event dedicated to Human 2.0 a new look at human enhancement. He was the first cyborg I met on the night, a handsome, mischievous guy with a infectious grin on his suntanned, kind face. Nigel lost his right hand in an accident and had recently been fitted with a bionic one. I approached him hesitantly, as I felt unsure if it was ok to shake his bionic hand, but his broad smile and outstretched right hand made the first shake easy.

While physically it is probably somewhat pointless to shake a bionic hand, as he can’t feel it, socially it is still very important as I can feel it and it connects us just as much as a normal handshake would do. In fact, it connects us a lot more, as Nigel’s was the first bionic hand that I had ever touched. I was very moved by the experience and grateful to him for making it easy for both of us.

We have run Cybersalon on and off since 1997, but this event was very personal for me. In 1945, just after the war in Poland, my family got kicked out of Vilnius (now the capital of Lithuania but it had been part of Poland since 1206) by the Russians and shipped out West to central Poland. Think Crimea but in 1945 and in much colder weather. Somehow, during the move, on cargo trains which had cows and people in the same carriage in minus 20 degrees, my grandfather damaged his hand, and had to have it amputated. He was a great man, a farmer, and a brave partisan in his youth, fighting both Germans and Russians in the forests outside of Vilnius. However, after the amputation, he never recovered, and spent the next 40 years of his life in a deep depression. He was immersed in a long stretch of sadness, only occasionally broken by a smile as we bounced on his knees as small children.

I was very close to my grandfather and became acutely aware of what amputation can do to people and their mental health, so it was with trepidation that I met Nigel. He told us his story, how hard his own mental journey was toward accepting that his own hand was just too damaged to ever function properly, and how he made a decision to get a bionic hand and be a pioneer in this newly available solution.

He argued with great passion of the need to invest and improve prosthetics science in order to support the millions of amputees worldwide who need help and discussed how technology could give them a chance to adapt better to their new lives.

Another pioneer of prosthetics, Veronika Pete, tells a story of incredible bravery and the strength of character required to learn how to live with only one leg. Veronica lost a limb following a traffic accident and is an amputee above the knee. Somehow, by luck or perhaps sheer determination, she found a limb maker that fitted her with a beautiful, cyborg-like leg that looked just like something from Star Wars. It had compartments, special lights, maybe even space for a spare keyboard or a charger for her mobile. It’s basically like a handbag, except better.

Veronika and the Alternative Limb Project created a number of amazing examples of out-of-the-box thinking on how to turn a disadvantage into an advantage. Veronika, a very beautiful girl with a wonderful smile, tells a story of how her confidence and interest in life came back after discovering what an intriguing adventure her leg 2.0 might be. My grandfather did not have the luck of living in the time of bionic enhancements and creative technology solutions and was left to his own mental strength to deal with the after-effects of amputation by himself. He lived to 87, but sadness stayed with him, as he couldn’t connect to his previous self.

There are other areas of disability where technology is beginning to fill the gaps. Neil Harbisson entered the cyborg life back in 2004, when he started a journey to develop technology to allow him to see colours. He notes that colour is a social thing and is very present not just on objects but in language. As such, not seeing colours appears to have a much deeper disadvantage that I had previously realised.

Neil has been through an extensive research program, and after many trials is currently fitted with a chip in his skull that enhances his colour processing. He also has the ability to hear colours (commonly known as synaesthesia), as his senses are extended via cybernetics, allowing him to see more colours than the average human range and certainly hear more sounds. He argues that the brain is highly plastic, flexible and adaptable, and that we have not really started pushing it to its true limits.

It occurs to me that, with the irreversible march of automation, if we want to compete with robots who will be equipped with such enhanced perception devices as standard, it can’t be too long before I need a kit like that fitted, perhaps in a more cheerful colour than Neil’s grey antennae.

Neil is an optimist on human enhancement and considers himself to be a well-adjusted ‘Eyeborg’, who can see UV, infrared and 630 colours, while his hearing is extraordinary too. This type of enhanced perception experiment allows us to understand that the brain is open for a lot more than the current setup allows, and that we should not be frightened to consider upgrading it.

We hear a similar argument from Frank Swain, who is affected by a progressive loss of hearing. He is interested in making the invisible visible, and is working on extending his hearing beyond the ’human’ range. For example, he is working on developing hearing for Wi-Fi, jointly with Daniel Jones, a sound artist. He told a story of how his original hearing aid was not only of a horrible beige colour, but was also not very good, only producing white noise. So that was the impetus for his project Hack My Hearing, which aimed to investigate if he could link a hearing aid to his phone and find out what else there is to hear. Frank shows that hearing is a great platform for the continuous input of data, and that it can be other signals, not just noise.
He argues that, in the situation of existing disability, it is an opportunity not just to catch up with others by using technology, but to try and advance perception enhancement and challenge the brain to hear more than humans were originally engineered for. Frank is someone who welcomes cyborg creativity and is enthusiastic about the enhanced futures.

In terms of the negotiations on what is and what is not acceptable in the realm of human enhancement, Dr Rachel Armstrong introduces a cross-cultural and medical perspective. She points out how important the external physique is to even the most disadvantaged humans. Rachel, as a young medic, worked in India and had the opportunity to practice at a leprosy colony. She witnessed how the members of the community reconstituted their being, how proud they were if they achieved normalcy through changing their aesthetics, by creating a nose out of wax or a functional grip to support their hand. They used what they could, driven by a desire to invert the body within their power structure. She has also worked with the performance artist Stelarc on an additional ear he had grafted to his body but sounded a voice of caution on the absorption of new elements by the body and the difference in human enhancement in terms of adjusting to disability versus experimenting on a normal, able body.

Rachel is reconceptualising our understanding of a body as a machine, proposing that the concept of a cyborg as a machine is an old paradigm. Her view is that the body is flexible, can constantly adapt and interact with its surroundings as well as its internal disabilities and can also adjust to all influences. She sees an opportunity for the cultural editing of the body, of letting go of the idea that our identity is linked to our bodies forever. I sense that she expects that it will not be long before our identities will move to ones based on our mental actions, and less on our physical bodies.

We asked sociologist Professor Steve Fuller for a comment on the ethics of human enhancement. He believes that humans already blend machine and biology, but also cautions that when the prosthetics become really advanced it may lead to “limb envy” and young people may aspire to copy enhanced humans. However, from Nigel’s perspective this is highly unlikely, as the current incarnation of even the most bionic of prosthetics is still significantly underdeveloped in comparison with a human’s hands and legs.

The last comment and a note of caution comes from Dave King, the founder of the Luddites at 200, who warns that cyborg enhancement may lead to appropriation of the body by the machine, where the body is seen as a piece of scaffolding for holding up all new wearable devices. He argues that we need to be aware of those risks and discuss the human prioritisation and need for consumer-level enhancement before we accept them on our bodies.

In the final panel discussions, Nigel, Veronika, Frank and Neil argued that the moral imperative is to progress work on new technologies in the fields of therapy and human enhancement, as we have an obligation to support the disabled and amputees. Nigel makes the point that everyone can be a future amputee and we need to take a more practical and therapeutic view of the need to step up the amount of investment into the technology of support. He argues that humans are adaptable and will always use technology as a tool, not subject themselves to it as a master.

I also can’t help but think that, if only those prosthetic advances had happened earlier, my grandfather and my family would have had a chance of recovery from his tragic loss.

Therefore, in my mind, there is no time like the present for investigating what more today’s technology can offer. If new technology can offer “fixes”, I will not be looking a gift horse in the mouth too much, as it would be churlish, not to mention selfish, not to try what it can do for those who need help. 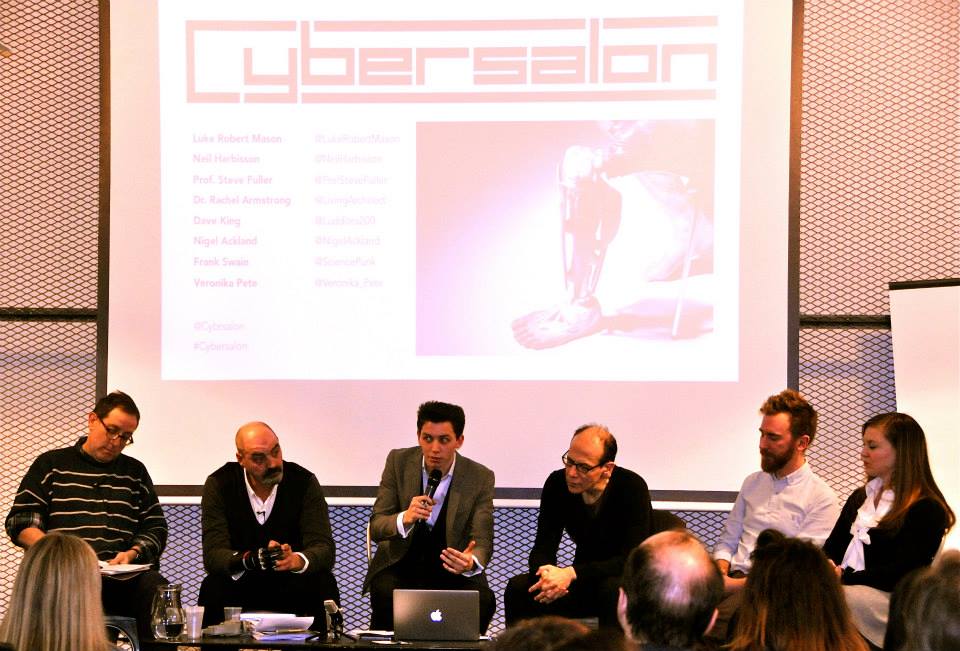 Previous: Look back: The Cyborg’s New Clothes – Wearable Computing, Interactive Fashion and Skin 2.0
Next: Surveillance: What is to be done?