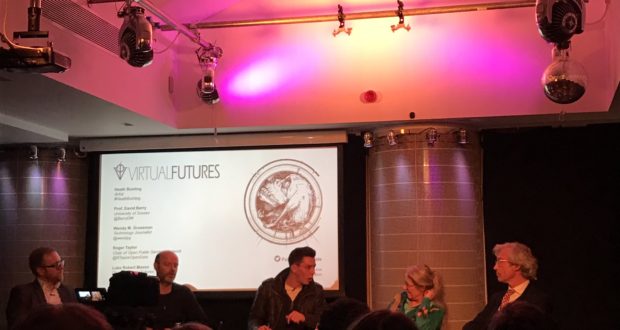 Virtual Futures presents a discussion on technologies of surveillance, the infringements on privacy by the state, restrictions of individual freedom and the mutation of identity.

In the latest edition of Virtual Futures – Surrender to Surveillance a wide panel discusses our model day society that is increasingly (or even already has become) a collective of users sold on the idea of personalisation traded for data that can be analysed and converted into commercial profit.

The panel opened with Heath Bunting talking about his work of uncovering the paths of terrorist all day from a Tesco club card to illegal online activity, as well as his pursuits in creating and developing new identities for himself as well as other people. His work allowed him not only to explore but also discover what the bridges between high street consumerism and terrorism are and how easy it is to cross them and become as suspect of the state without even realising.

The panel discussion opened with Wendy Grossman pointing out that privacy should not be only seen as an individual right, we should rather open the discussion on intellectual property models on shared data as all data is generated collectively. A good metaphor for this would be the generic parent advise that teenagers shouldn’t get too drunk at parties if they don’t want pictures taken of them that might “ruin their careers in the future”. We should rather be thinking about people, and constructing rules for them, who take the pictures and violate an individual’s right to privacy.

Professor David Berry followed the discussion with pointing out that we are experiencing a revolution and we are not yet equipped to fully understand and name a data based society. We do not have a grasp on the necessary sociological language nor political context. Instead we are currently reusing concepts such as privacy that might not entirely encompass all the meaning of private data and the need for its protection. Data is the new oil and it requires new rules.

Grossman points out that oil and data and essential different even if metaphorically similar, in the way that the value of oil is always bade on its scarcity while the value of data is based on its abundance.

Roger Taylor points out that data and the generation of it can be a very valuable and useful thing for the collective and can be very beneficial. But the issue is that corporations and governments do not have the collective in mind, there profit does not life with everyone’s wellbeing and protection. In order to prevent this being damaging to us we have to understand and reassess the use of data. We have to explore its infinite possibilities; the information it can bring us and what change can come out of that information. The essential goal should be to democratise data for our benefit as a collective.

As a society we have come to a point where we have very adaptable preferences. Our security would increase by 90% instantly if we were to smash our phones, according to Heath Bunting, however nobody is prepared to do that. And we should not have to sacrifice the benefits and usefulness s of a smartphone in order to protect ourselves.

David Berry points out that transparency is a problematic concept and we currently have a utopian notion of what technology can give us. We are naive to think that opening up data will give us freedom. There are those who give data and those who pay; there is an economic structure around data. The rich will always have access to certain outcome and control over their circumstances purely from the fact that they can afford to. Wealth will also give access to privacy, privacy that people less lucky might not be able to afford and will have to succumb that their own data will have over them, by way of governments and corporations.

As Roger Taylor goes on to discuss, data and our protection is a collective problem and demands awareness, and the problem will have to be solved collectively. We need new institutions that will create and drive things in a digital world. We do have to cut the ability to monopolise information and data and the results.

An interesting point is made in favour of traditional institutions such as courts as well us laws being a very important aspect of regaining our power over the data we create. Progressing towards being able to punish those that step out of line, CEOs and companies rather than private individuals, would set a standard of practice and guidelines for future developments of protection of citizens.

As the discussions opens to the audience an interesting question is posed – how do individuals develop rights over corporation and how do we come to own these rights for our benefit?

Heath Bunting puts it down to language. The language we use is our greatest weapon. With privacy we are suing neo-liberal terminology. We all have individual phones and iPhones and believe we are all special. But it’s corporations that work together to benefit from us, therefore understanding our own status and opening the discussion is the way forward.

On the other hand Roger Taylor puts it down to collective ownership of data. Increasing public understanding of how this operates and defines the conversation is essential. How do we design these institutions is up to us and should be for our benefit.

David Berry proposes that we need to think as a group. We need to start rising class-consciousness around the issues and depoliticising the problems and technologies. Building those coalitions and vocabulary to benefit the collective.

The anxiety around data and the issues it poses are not widely understood but as more emerge it will become more obvious why the way our data is gathered and used is problematic. Starting with the fact that adult and child data is mixed in one big pool and does not allow for extra protection of under aged individuals as well as giving them freedom of choice to erase their data once the are 18 which for a lot of people might be a breaking point in their lives.

Wendy Grossman closes the discussion by pointing out that we need to understand whether surveillance and data collection are compatible with democracy, despite the fact that Britain is not currently a real democracy.

2017-05-22
Karolina Janicka
Previous: Policy questions for 2022 – Net.wars by Wendy Grossman
Next: The Secrets of Surveillance Capitalism by Shoshana Zuboff