The Blockchain Menu by Wendy Grossman The Internet of Things is such an established concept that I’m startled to note that week’s (Lego) prototype was my first. Three cars want to park…somewhere. Their owners have preset the maximum they will pay. The system locates the nearest parking space, and they bid. The winner is directed to the space, and the fee is automatically deducted from the car’s balance. A display showed the auction in real time. All very nice until I injected reality by grabbing a car and plunking it in the space before bidding ended.

“Usurped” the contested space was now tagged. “You’ll be fined,” Consult Hyperion‘s demonstrator said. Who will that stop in Manhattan, where friends have missed two successive movie showings because no parking space? This may be an entertaining solution wishing for a problem.

In that, it was not alone at this week’s Tomorrow’s Transactions Forum, Dave Birch‘s quirky annual event where ideas about the future of money are smashed together like particles to see what happens. Last year’s excitement about blockchains has calmed. Michael Salmony, executive advisor to the pan-European payment services provider Equens, who pointed out some of the wilder claims (it might have saved Lehman Brothers!), recommended defining your problem before asking what technology solves it. “No customer comes in and says he has a massive distributed ledger problem.” Quantum computing will break crypto anyway.

Dismissing Salmony as a fuddy-duddy with a grudge isn’t easy, given his PhD in distributed systems. He compellingly argues that blockchains aren’t the computer science breakthrough many people think. After reeling off examples such as airline reservations systems, he added. “There are dozens of systems that are highly reliable and that scale without using the energy of a small country….I would like to see evidence why the blockchain would make things better.”

Similarly, Kelly Olson, director of Intel’s distributed ledger technology group predicted that except in niches (“drugs”) distributed ledger technologies (blockchains) “probably” won’t replace either cash or everyday retail payments. But they can be valuable areas such as event tickets issued as entry-granting RFID codes, or bringing together disjointed shared systems such as the San Francisco Bay Area’s BART, Caltrain, and FasTrak. Perhaps also identification systems, if verifiers accept each other’s credentials. Today, everyone’s separate: banks don’t recognize each other’s verification, and you can’t port your reputation from World of Warcraft into Airbnb, Airbnb into Uber, or Uber into eBay. People have been complaining about this for a decade, but still: silos. 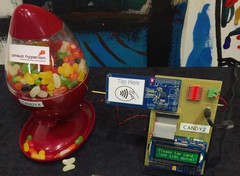 Portability is what cash gave us. Here, though, it won’t even get you jelly beans: the demonstration candy dispenser only responds to smart cards tapped on its Raspberry Pi reader. “It works!” Birch exclaimed, perhaps relieved, having failed with contactless Monopoly. The 1963 Diner’s Club game was trouble-free.

Intel’s sees opportunity in scaling: thousands of nodes means many processors. The fundamental shift to decentralized endpoints, however, is a security challenge. How do we protect privacy when, “There’s no clear way to add that to the blockchain today without adding a centralized factor”?

Scaling and interoperability also concern R3, a consortium of 42 of the world’s largest banks: “If the hype is true, then they’ll have to be deployed at scale by multiple firms using agreed standards and protocols,” said Richard Gendel Brown, R3’s CIO. Yes, he said, there is a genuine problem in ensuring that everyone sees the same synchronized truth – but it doesn’t follow that blockchain is the solution. R3 is building a new open source platform, Corda, that is “private by design”.

R3 sounds to me like “the banks strike back”. And maybe they need to: Ben Dyson, founder of Positive Money wants to reform the monetary system to be less dependent on banks. He proposes that consumers should be allowed to open accounts at the Bank of England as the electronic equivalent of hoarding physical cash. Without underpinning risky loans, you could eliminate deposit insurance and connect accounts directly to payment services, ensuring greater competition.

Before you get too excited, a search finds Andy Haldane, chief economist and executive director of the Bank of England, arguing in September 2015 that the bank should issue a state-backed digital currencyand get rid of cash so the bank can charge trapped consumers negative interest rates. 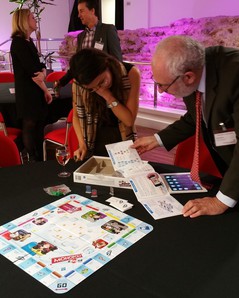 All these ideas renew many previous internet conflicts. Consult Hyperion’s Stuart Fiske argued this wasn’t the plan: the Internet of Things was supposed to be anonymous things exchanging weather data or the location of traffic jams. But bring in delegating payments – as in the parking demonstration – and now you require a way to identify the machine and assure it’s genuine. No, Tony Fishargued, we’ll see barter instead of payment; for many things identity won’t exist. This has not been the recent direction of travel.

In his new book, Digital vs Human, futurist Richard Watson agues that people assess piles of physical cash differently than they do a readout of numbers, an idea that recalls to me the emotional detachment Sherry Turkle documents in online personal interactions.

Money, both Watson and Tatiana Cutts and Watson noted, is freighted with enormous cultural significance. If money is community, will membership in Apple Pay become more meaningful than national citizenship?