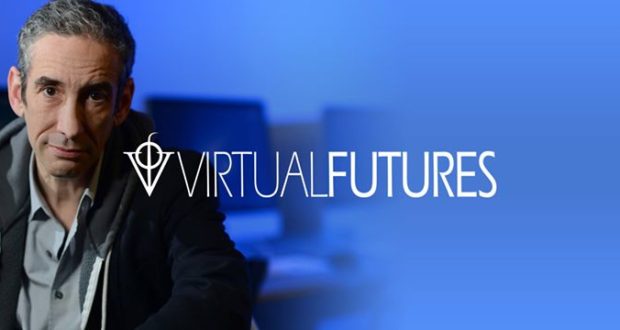 In the latest, and probably one of the most exciting, installations of Virtual Futures Luke Robert Mason meets Douglas Rushkoff to discuss the future, AI and Ariana Grande.

Douglas Rushkoff is the author of Cyberia, a book that revolutionised how we see technology and its implications in our humanity. His book was first launched in our very own Eva Pascoe’s Cyberia cafe back in 1994.

Rushkoff begins by examining how we behave and react to our own values. We leave behind value systems based on previous errors as if they’re obsolete without recognising we can retrieve certain values without going back in time. By accepting our agency and autonomy to do so. Accepting our role as real programmers of our reality would be a step forward, creating a reality of our own governance. If we accepted the general values of “good computing” as good living we would be able to move forward and embrace reality and technology together rather than as separate entities.

One of main Rushkoff’s endeavours is the creation of ‘Team Human: A manifesto’. The purpose of this is rather than diminishing humanity, embracing it and marvelling at its wonders. Rushkoff proposes that there should be a role for humans in the digital future and we should not only embrace it but also create it ourselves.

When discussing AI, Rushkoff proposes that the threat of AI is advertising, it is driven but the corporational need of profit and it might not necessarily reflect on the actual reality of AI, or even what it can create.

Rushkoff proposes that for change to happen and for it to be favourable to humans, we need to take possession of technology and make it value what humans value most.

With time we will get comfortable with things that extend our abilities just as we have in the past. Can we make our economy less competitive to remove the obligation of accepting these technologies to be dictated? We will only be truly ready for change when we understand who we are and what we want, as making technologies is what makes people human.

When asked how he feels about the future generation, Rushkoff showed hope. And as a good example of why we should all feel hopefully he used the recent attacks, mainly the one on the Ariana Grande concert and how everyone had come to console and support each other.

So even though the future might look bleak to some of us, Rushkoff and Team Human see a much more human and united future. Only time will tell.

If you have contributions or opinions about this we would love to hear you. Please visit our Facebook page.