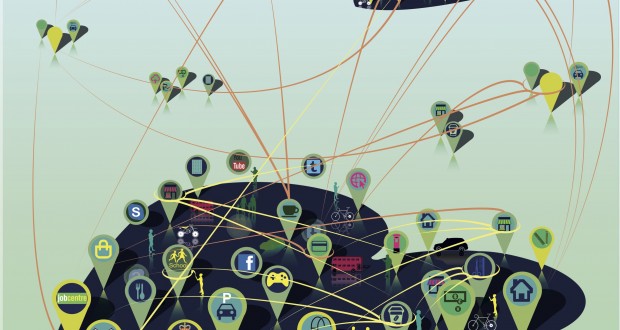 UK Cities are broke, gridlocked and unfriendly. In the USA, Detroit has filed for bankruptcy with $18 bn debt. In the UK, the High Streets are in decline and the concept of a local community is but a ghost of idyllic past. London, Elysium-like, is floating above UK,  taking with it the rich and international elite, leaving the locals and the rest of UK Cities behind, on the downwards spiral to ever faster decline.  Manchester leads the UK Cities debt table with over £5 bn in the red, Birmingham and others follow in the race to more borrowing. The government agencies operate in silos, balkanised and starved of funding after 5 years of declining tax income and State-shrinking dogma.

To debate the re-framing of the Smart Cities or the ‘De-Growth of Cities’  movement (Manuel Castells) we examined the current narrative,  its relevance to the reality of the City Living and our task of filling the vacuum left by the fast shrinking State.

James Cleverly is a conservative politician who is looking at decentralised work and the ways this could be used to benefit society. In particular, Cleverly makes reference to decentralised work as a way to address the gender pay gap through home working for mothers. He also refers to the strain put on public transport systems during peak hours, and the ways working from home could ease pressure on the existing societal transport infrastructure.

Cleverly advocates a more networked commuting pattern which would encourage people to work, shop and socialise in the areas where they live. He is keen to encourage people with spending power to access the suburban high streets.  In his terms, the lower costs of working outside London would make suburban areas ideal for startups. However, for this to function effectively, it would be necessary to build business and work hubs with superfast broadband.

Cleverly suggests this development is not something the government will drive forward. He states it needs to be a grass roots initiative where people begin build confidence in the idea by relocating. Only with evidence of success would it be the right time to address the government. Overall Cleverly feels suburbs are where start-ups should be locating, as this will optimise resources and time.

Eva Pascoe aims to enliven Britain’s high streets by helping them to function more like smart cities. Pascoe states that London is growing exponentially, and that the density of people within the city is becoming unmanageable. However, counter-intuitively, the high streets are failing with over 40,000 shops currently empty in the UK. Pascoe makes reference to Mary Portas’ Pilot scheme, where £18 m was spent on regenerating Britain’s high streets, but 95 shops were actually lost in these ‘Portas Pilots’. To Pascoe this is partly because people simply shop online today, so making the high street look more desirable is not a big enough gesture to save it.

Pascoe wants to use data gathering techniques to find out why the high streets are suffering, and to make them function more successfully so that small independent shops can work alongside large chains such as Tesco. Pascoe advocates the mapping of dense data on the high street by citizens and the production of apps which then feed the population information about the high street, helping it to function smoothly. Examples of this mode of working include apps which allow members of the public to advertise independent initiatives or point up antisocial behaviour.  Pascoe’s overall aspiration would be to connect these different data pools and applications, building a digital infrastructure which joins networked high streets up to form a smart city.

Sergio Falletti advises clients on mobile technology for Digitas LBi. Falletti does not consider himself a policy maker, but rather a technologist working to make money for big organisations. Falletti speaks about some of the new features in Apple’s IOS7 such as multi-tasking functions and core motion sensors. This operating system monitors when apps are used, and then decides when to download new data accordingly. The iPhone will also recognise where you are and give you information about products you see there. Apps are also measuring distances in the background at all times and taking information from the user about this.  Within Google maps, routes which are repeated are then used to predict behaviour. For instance this application might automatically recognise a user is going home and give a timeframe and route for this. Falletti points out that the track record of Google maps to accurately predict movement is not good, as it is a complex area of technology which is difficult to manage.

Falletti goes on to speak about how the Internet of Things used to be about applications speaking to one particular object, whereas now things have changed. There are whole branded eco-systems, where information gathered relates to a range of environmental and psychological factors around a particular set of products. There are also unusual uses of specific technologies, such as the use of drones to produce a 3D map of the Mattahorn. Projects such as this latter initiative function in a relatively open and bottom up manner. However, to Falletti, open systems create questions about how it is possible to create a trusted authority.

Phil Campbell speaks about his current project: the Pi Street. This is an app which aims to help independent store owners in Nottingham by enhancing their digital presence. Raspberry Pi computers, costing £35 each, are installed in independent shops, and used to feed information to potential customers and fellow shop owners about what local businesses are up to, helping to create a community buzz around these initiatives, and to share information between businesses.

The first phase of the project was developed through crowdfunding on Kickstarter, meaning that the Raspberry Pi screens could be offered to shop owners at no cost. Campbell aims to develop the project further through patronage from the public. Ultimately, Campbell would like to see the application rolled out in other towns and cities across the UK.

Priya Prakash believes that the fastest growing startup in the UK should not be Wonga, and that we should use the clever people behind such initiatives to more socially progressive ends. Prakash has therefore developed Changify in Camberwell in South London. This website aims to use design to inspire a change in habit and social behaviour, and ultimately alter culture through this means.

Within the site, members of the public can take photographs of areas of their local area which need developing or changing, and then build practically realisable, crowdfunded solutions to these, potentially by local businesses. By working on projects, users gain loyalty points, and Prakash is interested in ways these points could be used to create a value system something like the Brixton Pound. Overall, this project is about working to produce smart citizens who actively work to better their neighbourhoods.

Towards a Concept of Popular Data

Can We Wire Our Cities to Prevent Ecological Collapse?

Summary: 26 Nov, Reclaim the City!
UK Cities are broke, gridlocked and unfriendly. In the USA, Detroit has filed for bankruptcy with $18 bn debt. In the UK, the High Streets are in decline and the concept of a local community is but a ghost of idyllic past. London, Elysium-like, is floating above UK,  taking with it the rich and international elite, leaving the locals and the rest of UK Cities behind, on the downwards spiral to ever faster decline.  Manchester leads the UK Cities debt table with over £5 bn in the red, Birmingham and others follow in the race to more borrowing. The government&hellip;