Return of the penguin – NetWars by Wendy Grossman

Posted by: Karolina Janicka in net.wars, Writing August 29, 2016 Comments Off on Return of the penguin – NetWars by Wendy Grossman 2,281 Views

Back in January, a motherboard malfunction led me to move my desktop machine to Linux. Some effort later, and I was mostly up and running – at least, able to work. What happened next is hard to describe. I had three classes of problems: old Windows stuff that needed to work or be replaced (or both); annoyances that I was probably just going to have to live with; and issues that had to be fixed for quality-of-life reasons. In the first category were things like Quicken (replaced by Gnu Cash) and Ecco (irreplaceable, even now, and I couldn’t get it working); in the second were things like the GIANT icons in the task switcher and the way the stupid thing groups windows; in the third were oddities surrounding audio, video, and Flash.

I would love to tell you how I got Flash working, fixed the no-audio issue, and found a way to play DVDs and HEVC files. I can’t. For one thing, even though the latest version of VLC is supposed to play HEVC files, my copy crashed almost every time I tried. (Sometimes it would play a minute or two and wait to crash until you thought it was going to work.) For the rest, I just kept following the advice I could stand to read on random web pages until somehow eventually the thing “suddenly” started working.

And then, for months, calm descended. I imported my old Ecco address book into a giant spreadsheet. I posted an easel pad and began writing the weekly schedule on it (because Thunderbird’s calendar is – let’s call it – quirky about when it feels like reminding you about the thing you’re supposed to have left for an hour ago. I switched to taking interview notes in LibreOffice and found its dictionaries are actually more configurable than Word 2003 and that, with version 5, it correctly imports comments and tracks changes from Word. I found that my Windows laptop could run Second Copy and keep the directories synched.

I also experienced a slight personality change, in that practices I found unacceptable when they were being done to me by Microsoft weren’t so bad in the Linux world. Chiefly, automatic updates. Where I never felt I could enable those in Windows because I couldn’t tell when something I was working on would vanish after an unexpected restart, I found Ubuntu unfailingly polite. Would you like to update this software now? Would you like to restart now or later? And when I chose later, it didn’t keep asking me again every ten minutes. So a lot more updates happened, and I relaxed some of my iron-fisted insistence on having directories the way I wanted them instead of the way the software did.

And then – you can see it coming, can’t you? – Ubuntu offered me an upgrade to 16.04. I had actually been waiting for this moment because, for reasons I still don’t understand, 14.04 had mysteriously stopped powering down the monitors when they were left alone for a while. I thought some recent update must have broken that particular function, and maybe 16.04 would fix it. And newer has to be better, right?

In the early 1990s, I used to giggle furiously when some technology editor would get overexcited and install a new operating system on his (usually his) machine without making backups first and spend the next week frantically trying to retrieve everything. But that was then, when the computer industry was young and immature, and issues like those were part of what made computers a cliquish subculture rather than a mainstream technology.

I had forgotten all that; it was a long time ago. Plus, Ubuntu had been politely downloading updates and nothing untoward had happened. I got reckless. I got cocky. I hit the upgrade button. No, not before running the synch routines to ensure the data was all copied everywhere. Not. That. Stupid.

I suspect it was probably my fault – for touching the keyboard and fiddling – that led the upgrade to crash about a quarter of the way through. From there, it was a losing battle. The computer booted to a perpetual black screen. Trying to go forward with the upgrade led it to do some inscrutable downloading and proclaim it successful when it clearly wasn’t: although I could log in from the terminal window, the graphical system kicked at my password, which meant all I could do with a quadcore and three large monitors was log onto the WELL. The computer was so confused that trying to run Software Update again led it to whine that it couldn’t update from 16.04 to 14.04. And so on. 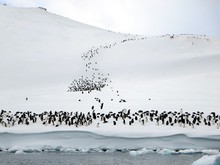 So, reinstalls all around, albeit with a slightly newer version of 14.04, and this time I’m keeping notes, which is the one piece of useful advice I’m offering here because otherwise you make the same errors of judgement as someone who gets months of medical treatments for cancer but thinks it was the homeopathic remedy that cured them.

Some things – audio, video, flash – have gone easier than last time. Samba, however, is putting up a long and boring fight that I nonetheless intend to win (apparently my idea of a summer vacation). Happy 25th birthday, Linux.

PS: I finally fixed the original screensaver issue by downloading Light Locker. I couldn’t have thought of that first?