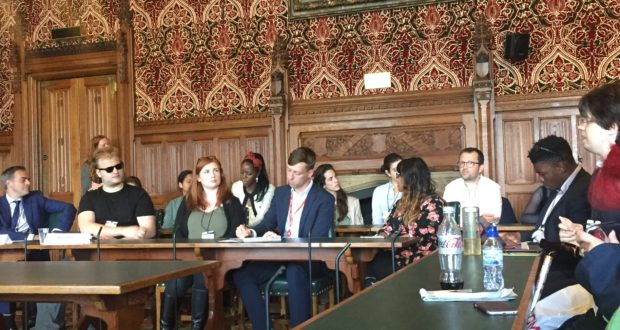 On a hot summer day House of Commons was the place to be for the representatives of disabled voters and international voting experts to debate the requirements for multi-channel voting enhancements, adding online option to the postal and person-present options.

The initiative to fix the access was led by Jonathan Bartley (@jon_bartley) from Green Party. He looks after his disabled son and shared his negative experiences when attempting to get his son to a voting station. He has commented on the importance of the newly published report on lack of inclusive voting facilities. It was researched by WebRootsDemocracy.org (@WebRootsUK), led by Areeq Chowdhury (@areeqChowdhury) recommending the need for pilots to test e-voting.

Ashkar Smith from The Royal London Society for Blind People, described how lack of accessible information hinders the voting process for the blind and partially sighted voters and where online voting would address the shortcomings.

Baroness Sal Brinton (@SalBrinton), a LibDem peer who sponsored the session and is also a wheelchair user, has also shared her ordeal when at the previous GE she made it to the polling station only to discover there were 2 steps to get into the room. Since she is a lady of considerable size, it is not a small task to get her wheelchair over the steps and it looked that she was not going to be able to access the room. It was only by luck that the Returning Officer saw her struggling and brought the paper ballot out to her. However, as Sally pointed out, Returning Officers don’t get sufficient training in disabled voting support and many wheelchair users don’t have a chance to enter the polling stations. 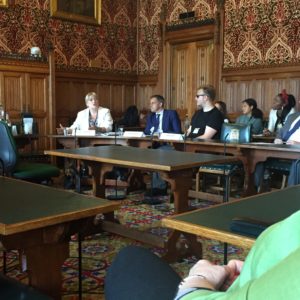 Representatives of the disability associations noted how keen people are to participate but lack of ramps for the wheelchairs, often lack of Braille versions of Manifestos for partially sighted, returning officers not trained as “too small percentage of voters are disabled” are all factors frustrating inclusive voting.

In fact, as UK is rapidly aging as a society, the percentage of disabled voters is not small, with just over 11, mln people are registered as disabled. From those, over 6.9 mln are working age but the rest are pensioners and the number is growing. 2mln of those are registered as partially sighted and need Accessible Formats manifestos. Not a small beer as we have learned only 74 votes could have changed the results of the GE2017.

In the situation when every vote counts, it is essential for UK democratic process that all those that can and are willing to vote, have correct access to their preferred voting channel of choice

Cat Smith (Labour MP) and Shadow Minister for Voter Engagement has committed to supporting extension of the voting to digital voting and emphasized that ‘technology has been an “enabler for disabled people in various respects and could make a huge impact for inclusive voting”.

Who else got their democracy process right?

Australian Parliament has been spearheading a number of technology transformations and are probably the best example of ‘what good looks like’ in the area of ‘inclusive voting.

Australian disabled voters have described the feeling of ‘liberation’ when electronic voting has become available to them a few years ago.

The disabled citizens, amongst others, have iVote at their disposal, a Remote Electronic Voting System known as the iVote®system that was introduced for the State General Election in March 2011. Since then it has been successfully used for all subsequent State by-elections. Under current legislation, the iVote® system cannot be made available in Local Government elections so it is not plain sailing but enough evidence for UK to build on. 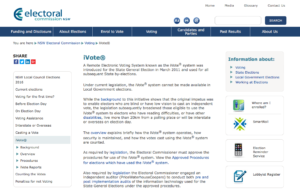 What is in place in UK? Siani Roberts (@SianiRoberts) from Electoral Reform Services (@ERSvotes) has revealed that currently just under 900 pilots for enhanced voting. However, for now ERS is focusing on AnnualCanvass, a Mobile Canvasser App that is based on market research framework and will not help inclusive voting in the short term.

A somewhat alarming separate issue on voting access was the fact that Conservatives did not publish Manifesto in Accessible Format till 3 weeks before the actual elections, making it obvious that 11mln of disabled voters are just not their demographics. Arguments that the time was short before GE a faster preparation of Manifesto formats were not plausible, as good governance would suggest that the date of GE will only be selected after the practicalities of elections prep (such as Accessible Formats Manifestos) will be considered and accounted for.

Other parties have managed to get their Accessible Formats on time so it clearly was a matter of lack of will for the government and this has been noted with concern by Royal Society for The Blind as well as other bodies representing the disabled.

Australian system is the strongest contender as the experience gathered since it’s inception in 2011 has provided the opportunity to test and fix most of the bugs. But there are others,

are all commercially successful platforms and can be tested to support the current multi-channel voting process. Tools are not the problem, as noted in “Geek Heresy” (Kentaro Toyama), it is the inclusive society vision and the human leadership which will improve lives of people in the era of tech, not the cult of tech itself.

There are risks involved in introduction of online voting and the representative of British Computer Society who looks after the disability and access issues has noted, that for disabled users learning any new digital platform is hard, regardless of how straightforward it seems to able-bodied users. User interfaces to modern online products carry significant context assumptions and build on the premise that users understand the concept of Back button or Home Button, which is often not the case at all with new users coming to the product.

Baroness Sal has specifically requested that training and inclusivity must guide any pilots of the online voting scheme and monitoring of users’ feedback about multichannel voting is essential to achieve practically accessible online voting.

Online voting is not just for Xmas

Both her and Jonathan Barley have emphasized the additional advantage of online voting, as it allows low cost, frequent consultations on any other issues outside of General Election time. Online voting is “not just for Xmas and GE but would be an aid to consult citizens on regular basis, to increase ‘bandwidth’ and participation”. In the rapidly changing world around us, every day a thick set of highly complex topics are going through the scrutiny in House of Commons and House of Lords and typically they are only allowed a cursory debate. For example, on the day of Inclusive Voting session, Brexit implications on NHS were debated in House of Lords and this very difficult topic only got 1.5h for discussion.

Most of that time was taken by the the discovery that no actual study or report was commissioned by the government to examine sustainability of NHS post Brexit. Online voting could be utilized as aid and an ongoing crowd-sourcing process to bring as much expertise to the topics as UK can muster, and thus increase the speed and quality of decision making in both Houses.

Where do we go from here? 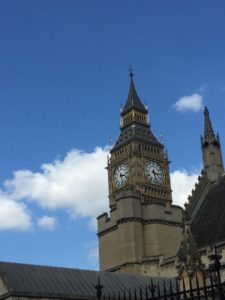 There is an increasing agreement that to promote inclusivity, and for non-disabled, a more frequent ability to ask opinions from the citizens, online voting needs to be added to the multichannel voting mix.

Cybersecurity of the political platforms is already under review after the recent breach of MPs email and the next generation of voting platforms will be modernized to include online security requirements. A possible option is to consider a blockchain application to provide a trust framework to online voting.

Lord Young of the Old Guard

Following the publication of WebRootsDemocracy report, on 12th of July Lord Young of Cookham responded to the question in House of Lords about the request for expanding the current process to include online voting option. His response was that “security issues are not resolved” and refused to examine or accept that other countries have solved those concerns. As nobody expects the current pen-and-paper format to survive in UK beyond 2025, it appears that the country will have to wait till the next election and a change of government to help the disabled to participate in the democratic process as they are entitled to and as is their right.

This summary was brought to you by Cybersalon.org campaigning for Digital Bill of Rights for UK https://cybersalon.org/digital-bill-of-rights-uk/ 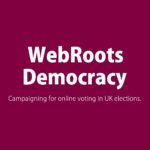