Don't Miss
Home / Wikipedia / The Age of the Internet, Surveillance and Profit

The Age of the Internet, Surveillance and Profit 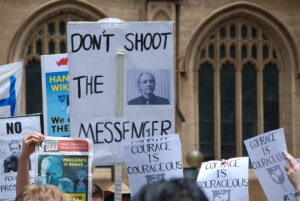 There is several interesting aspects to the development of the Internet. One of the most important ones to point out is that as the Internet was developed it also developed to be not only a pioneer but also a beacon of hope for free speech and the development of free uncensored communication that would allow people to communicate globally as well as freely. Ideas, feelings, projects… anything could be shared on the internet with others and for others to see. One of the outcomes of that is that ‘others’ means literally anyone with access to this data, and specifically ‘others’ these days refer to Others – the people that we can’t see, and we can’t control. People that hold the absolute power to the knowledge and information generated by all of humanity, the key to any kind of communication linked to a phone network.

Before, during and after World War I and II and the Cold War, and any other war that has ever taken place, surveillance is a given. It is a fact of any conflict, and therefore accepted as a necessity to the solution of any conflict. It seems as if if government know it all they will be able to solve it all. Isn’t that an amusingly interesting thought? It’s almost poetic how useless that idea is. A government that knows it all will be able to solve it all. If that were the case then why do we still have wars? Why do we still have civil conflicts, international wars happening behind closed wars, terrorist attacks and military disturbance? If the governments work so hard on knowing all, how is it possible that they know nothing about the Internet?

In the past 30 years along with the expansion of the Internet we have experienced an expansion of surveillance. As opposed to when surveillance was only performed by a selection of governments such as Britain and America, it is now an every day task of any government whose country has internet access. It seems as if politicians are responding to the Internet as a weapon, as a threat to their power. And it some ways it is. There is a variety of examples a part from WikiLeaks that show the power of the Internet, and therefore of the people. Anonymous “is at work decolonizing deep-seated habits of subjectivity: it dares to work toward a collective good without the need for personal recognition and furthering a personal brand’ (Coleman, 2014). For years now people have been sharing their ideas and forming resistance groups, peace organisations and campaigns to fight agains cruelty and injustice. But an interesting aspect of all this power that people have been given is the outcome. In the event of succeeding there is no more to do but celebrate, but what happens if a campaign fails? What happens if people that are trying to fight against tyranny are defeated by the government that was oppressing them? The Internet becomes their worst enemy. Due to the lack of regulation on what personal information can or cannot be tracked back down to a user any person involved in something that corrupted governments find threatening can be tracked back down and in the worst case disappear forever.

It seems that just as the Internet has become the most amazing tool man has ever created, it is also the biggest threat we have ever encountered to our free speech and eventually to our own personal freedom.

An interesting analogy to make, in order to understand the Internet better is with the Printing Press. First created by Johannes Gutenberg in 1440 it was widely banned in areas of Germany where it conflicted with the business of publishing of the Catholic Church. The response was to move to another area in order to spread the word and technology (Assange et al., 2013), and slowly it evolved to be widely available and is now the underlining technology of anything that has ever been printed. With this practice the monopoly that the Catholic Church had over the publishing and distribution of books was completely changed. Freedom of speech evolved from the fact that people were able to print and distribute their own ideas without the Church controlling them. This way the whole industry was created and new rules to printing were introduced. In short, the publishing industry evolved and broke the monopoly that the Church held over it.

Taking this in mind, lets look at the monopoly held over the Internet, and particularly over the data created online. Owners of free web services are big corporations such as Google and News Corporation. The aim of these companies, just like any other business, is to generate profit, yet services such as the Google search engine, YouTube and Blogger are free to the consumer. Nevertheless in the Forbes 2000 assets ranking Googles value amounted to 40.5 billion US dollars. While providing a free services these corporations exploit user generated data and content for their profit and increase of capital (Fuchs et al., 2013). But what data, how much of it and most importantly how does that affect the user?

In the case of services such as Facebook and Google it is general knowledge that our everyday activity is registered and safely guarded to be then redistributed among third party investors, businesses and corporation for no other purpose but that of profit. The important question there is whether the user has any power. And the simple answer is no. We do not hold nay power over anything that we do on the Internet. Essentially we have given up our freedom and our freedom of speech for the benefit of a free service. Say one wrong thing, be at the wrong place, and someone somewhere will be able to see it, whether you are aware of their existence and their vigilance over your life or not. And there is not much to do. How have allowed this to happen?

Many corporations justify the exploitation and gathering of user data with the claim that the gathered data will allow them to adjust and improve their service in order to improve the users experience (Mobile World Congress 2010 and Schmidt, 2010). Essentially we have given up our freedom for the commodity of an improved user experience.

But what would happen if software and hardware were free and accessible? What if we as users were able to understand the products we use in depth and therefore change and adapt them to the experience that we desire. Turn them into something to benefit us directly, rather than benefit a chain of corporations drawing profit from it to then deliver us something that could still be improved further but hasn’t been, in order to keep generating data for the benefit of the profit?

It seems as if the Internet is there for us to use, and the tools are available, or can be made available if we put our mind to it. Just as with the printing press, we need to understand the need for change and the need for development, especially with something as powerful as the Internet. It is a tool that has allowed us to share information and communicate on a global scale, and even though it is an admirable piece of technology that should be cherished and developed for out benefit, we need to understand that just as for centuries before now not everyone, and especially not everyone in power, has had more than their own personal benefit in mind, we the people need to bring the change we want to see in the world, and the world of the Internet, to the table. We need to create a world on the Internet that rather than reflecting the reality and injustice of our real life, will create a new free world and protect our future.

“Governments of the Industrial World, you weary giants of flesh and steel, I come from Cyberspace, the new home of Mind. On behalf of the future, I ask you of the past to leave us alone. You are not welcome among us. You have no sovereignty where we gather.”