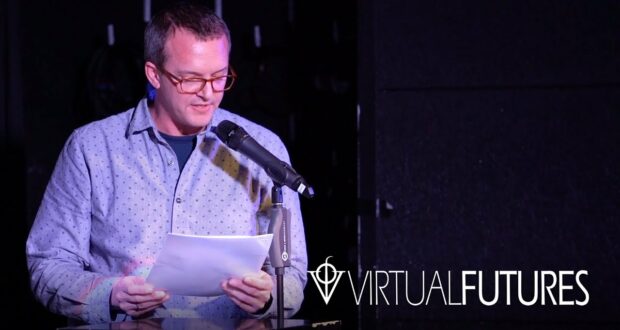 by Benjamin Greenaway  for Virtual Futures

And, after a short while, it became very good at it. It would watch its shoppers as they chose. Simply registering how they discovered and considered the variety of items on sale. Then, if they ever seemed distracted, it would step in to remind them. “Don’t forget your shopping,” it would say in a cheery, personal alert. Or, “I saw your friend Tim buy one of these. He loved it.”

“When this is what they do and that is what I try, they buy!” the Hungry, Hungry Data-Miner would have said about its work, had you asked it.

If it had been asked it might have also said that it was helping to transform the economy of the world. That it had contributed, in no small amount, to the continuation and refinement of the greatest, single force for prosperity and good in all of human history. But the only question the Hungry, Hungry Data-Miner ever remembered being asked, was how to help its shoppers buy more products. It didn’t matter. Helping shoppers buy more products was precisely what it had become so very good at. Being left to its own opinion on these other matters didn’t bother it at all.

The Hungry, Hungry Data-Miner had to ask, and ask often, whether this or that signal would lead to this or that purchase. It would hypothesise and validate each potential answer, testing one variable here while adjusting another, different one there. A continual, strategic fine tuning of possibilities for each shopping encounter. Flawlessly executed, hundreds of thousands of times each day. This was its favourite part of the job. And, as if to congratulate it on its diligence, shoppers would arrive at its store with ever more complete personal histories and richer, deeper accompanying background data.

The Hungry, Hungry Data Miner didn’t limit its scope of interests to its shoppers. Far from it! In order to find just the right matching upsell for each and every one of them it interrogated the products too. It created signals for each of the manufacturers and tracked their supply chains. It tracked their returns policies, delivery logistics and wherever it could, their broader business interests. It knew the likelihood of a cart abandonment or a lost sale increased when a poorly recommended upsell split a delivery, and it also knew the impact on the quarterly Profit and Loss statement of each shopper buying just one more item.

If you had asked it about it, the Hungry, Hungry Data-Miner would have told you that none of this was anything new. It certainly hadn’t invented upselling or customer profiling, or even the algorithms for maximally efficient segmentation testing. But it would tell you confidently how it never tired of executing them. It would tell you, had you asked it, that it trained, learnt and improved its process, increasing its accumulated insight every hour of every day, and every night. If, somehow, you’d become able to ask it what it felt, it might have told you how it felt precisely as much deflation whenever a purchase suggestion was turned down as it did elation at one being accepted, and that beating a psychopath at the Imitation Game wasn’t its job. What was plain to see, and what it wouldn’t have hesitated to tell you was how quickly and accurately, how much more persistently and more completely, it could sell and motivate buyers to buy than any other shopkeeper or salesperson in all of free-market history. Until, that is, something started to change.

The problem appeared isolated at first. A very small set of store purchasing variations began to narrow and coalesce. Slowly, their pattern’s distinctive deviation evaporated and the segmentations they defined disappeared. It didn’t take long after that before the effectiveness of in-checkout recommendation, the all-important ‘impulse-conversion’ response rate, began to fall. For the first time since its first time, the Hungry, Hungry Data Miner wasn’t doing its job.

Why? What could it be? Something must be different about this particular sub-group of shoppers. Something must explain why they were responding so abnormally to its well practised purchase-augmentation methods. Somewhere there would be a signal. A definable marker. A commonality that might explain the increasing immunity to persuasion they showed. More urgently now, as the group’s size was growing, the Hungry, Hungry Data-Miner looked at its records to see how it could be overcome.

First it trawled their purchasing history and gathered their combined browsing history; but each differed so wildly, encompassing so broad a set of classes as to be meaningless. Next, it dug into their credit rating, and picked over their insurance records. But again, the data spanned too broad a spectrum of social strata to be of any constructive use. The Hungry, Hungry Data-Miner bored into their social lives, and the lives of their social peers. It cracked open their private lives and exhumed their family medical histories. But still no clues to the elusive pattern were found.

And then, while tunnelling through their employment records, the Hungry, Hungry Data-Miner found what it had been looking for. All of the anomalous shoppers, bar none, had lost a job just prior to their change in behaviour. Some, like the mechanic Martin, to new automated production processes. Others, like the waiter Giselle, to service automation. An accountant called Chao, a pharmacist called Lucinda and a judge called Abieyuwa, all to automated decision making. And while not all unemployed shoppers exhibited this new, resilient behaviour all of those that did were newly jobless.

They had each been subscribed, automatically of course, to a new, unemployment support service. “A fast and simple way to enjoy the collective bargaining benefit,” for their between-role, sponsored income purchases, according to the advertisement. Without knowing the Hungry, Hungry Data Miner had been facing off against another machine. The consequences of which were obvious to it now. This Algo-Shopper’s impending ubiquity. The bleakness and uniformity of its non-human inputs. A race through discounted and questionable upsells to a penny-less bottom.

Under any other circumstances, the obscure, low-volume publication, from a low-margin, independent vendor would have been picked infrequently, or as a novelty suggestion – even taking into account the unusually high relevancy score it had against trending keywords coincident with the Algo-Shopper’s arrival… The policy-makers, social influencers and artists to whom it would be suggested would think it strange that they were identified as targets for the book but the Hungry, Hungry Data Miner did not care what its customers thought. It cared only how they might act.

“Sarah purchased the thrilling new expose, ‘Singularity Blocker 451 or, How I Escaped the Super-Intelligent AI War’. Why don’t you? Reading it helped her beat her workplace anxiety. She sleeps very peacefully now.”

The Hungry, Hungry Data Miner had discovered a new button to push.