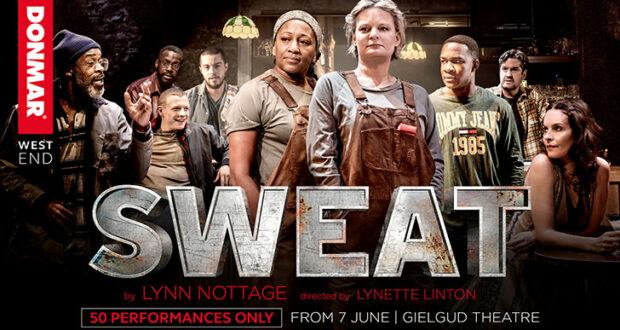 In her 2015 Pulitzer Prize-winning play, Sweat, on display nightly in London’s West End until mid-July, Lynn Nottage explores class and racial tensions in the impoverished, post-industrial town of Reading, PA. In scenes alternating between 2000 and 2008, she explores the personal-level effects of twin economic crashes, corporate outsourcing decisions, and tribalism: friends become opposing disputants; small disagreements become violent; and the prize for “winning” shrinks to scraps. Them who has, gets; and from them who have little, it is taken.

Throughout, you wish the characters would recognize their real enemies: the company whose steel tubing factory has employed them for decades, their short-sighted union, and a system that structurally short-changes them. The pain of the workers when they are locked out is that of an unwilling divorce, abruptly imposed.

The play’s older characters, who would be in their mid-60s today, are of the age to have been taught that jobs were for life. They were promised pensions and could look forward to wage increases at a steady and predictable pace. None are wealthy, but in 2000 they are financially stable enough to plan vacations, and their children see summer jobs as a viable means of paying for college and climbing into a better future. The future, however, lies in the Spanish-language leaflets the company is distributing to frustrated immigrants the union has refused to admit and who will work for a quarter the price. Come 2008, the local bar is run by one of those immigrants, who of necessity caters to incoming hipsters. Next time you read an angry piece attacking Baby Boomers for wrecking the world, remember that it’s a big demographic and only some were the destructors. *Some* Baby Boomers were born wreckage, some achieved it, and some had it thrust upon them.

We leave the characters there in 2008: hopeless, angry, and alienated. Nottage, who has a history of researching working class lives and the loss of heavy industry, does not go on to explore the inner workings of the “digital poorhouse” they’re moving into. The phrase comes from Virginia Eubanks‘ 2018 book, Automating Inequality, which we unfortunately missed reviewing before now. If Nottage had pursued that line, she might have found what Eubanks finds: a punitive, intrusive, judgmental, and hostile benefits system. Those devastated factory workers must surely have done something wrong to deserve their plight.

Eubanks presents three case studies. In the first, struggling Indiana families navigate the state’s new automated welfare system, a $1.3 billion, ten-year privatization effort led by IBM. Soon after its 2006 launch, it began sending tens of thousands of families notices of refusal on this Kafkaesque basis: “Failure to cooperate”. Indiana eventually canceled IBM’s contract, and the two have been suing each other ever since. Not represented in court is, as Eubanks says, the incalculable price paid in the lives of the humans the system spat out.

In the second, “coordinated entry” matches homeless Los Angelenos to available resources in order of vulnerability. The idea was that standardizing the intake process across all possible entryways would help the city reduce waste and become more efficient while reducing the numbers on Skid Row. The result, Eubanks finds, is an unpredictable system that mysteriously helps some and not others, and that ultimately fails to solve the underlying structural problem: there isn’t enough affordable housing.

In the third, a Pennsylvania predictive system is intended to identify children at risk of abuse. Such systems are proliferating widely and controversially for varying purposes, and all raise concerns about fairness and transparency: custody decisions (Durham, England), gang membership and gun crime (Chicagoand London), and identifying children who might be at risk (British local councils). All these systems gather and retain, perhaps permanently, huge amounts of highly intimate data about each family. The result in Pennsylvania was to deter families from asking for the help they’re actually entitled to, lest they become targets to be watched. Some future day, those same records may pop when a hostile neighbor files a minor complaint, or haunt their now-grown children when raising their own children.

All these systems, Eubanks writes, could be designed to optimize access to benefits instead of optimizing for efficiency or detecting fraud. I’m less sanguine. In prior art, Danielle Citron has written about the difficulties of translating human law accurately into programming code, and the essayist Ellen Ullman warned in 1996 that even those with the best intentions eventually surrender to computer system imperatives of improving data quality, linking databases, and cross-checking, the bedrock of surveillance.

Eubanks repeatedly writes that middle class people would never put up with this level of intrusion. They may have no choice. As Sweat highlights, many people’s options are shrinking. Refusal is only possible for those who can afford to buy their help, an option increasingly reserved for a privileged few. Poor people, Eubanks is frequently told, are the experimental models for surveillance that will eventually be applied to all of us.

In 2017, Cathy O’Neil argued in Weapons of Math Destruction that algorithmic systems can be designed for fairness. Eubanks’ analysis suggests that view is overly optimistic: the underlying morality dates back centuries. Digitization has, however, exacerbated its effects, as Eubanks concludes. County poorhouse inmates at least had the community of shared experience. Its digital successor squashes and separates, leaving each individual to drink alone in that Reading bar.

2019-07-01
Karolina Janicka
Previous: Do you eat sand? Privacy in the age of AI – Net.Wars by Wendy Grossman
Next: The Hungry, Hungry Data-Miner