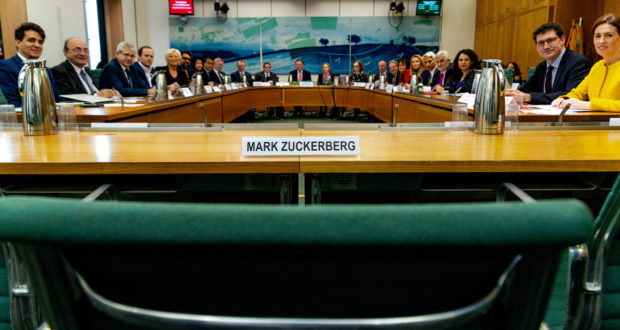 “I think we would distinguish between the Internet and Facebook. They’re not the same thing.” With this, the MP Damian Collins (Conservative, Folkstone and Hythe) closed Tuesday’s hearing on fake news, in which representatives of nine countries, combined population 400 million, posed questions to Facebook VP for policy Richard Allan, proxying for non-appearing CEO Mark Zuckerberg.

Collins was correct when you’re talking about the countries present: UK, Ireland, France, Belgium, Latvia, Canada, Argentina, Brazil, and Singapore. However, the distinction is without a difference in numerous countries where poverty and no-cost access to Facebook or its WhatsApp subsidiary keeps the population within their boundaries. Foreseeing this probable outcome, India’s regulator banned Facebook’s Free Basics on network neutrality grounds.

Much less noticed, the nine also signed a set of principles for governing the Internet. Probably the most salient point is the last one, which says technology companies “must demonstrate their accountability to users by making themselves fully answerable to national legislatures and other organs of representative democracy”. They could just as well have phrased it, “Hey, Zuckerberg: start showing up.”

This was, they said, the first time multiple parliaments have joined together in the House of Commons since 1933, and the first time ever that so many nations assembled – and even that wasn’t enough to get Zuckerberg on a plane. Even if Allan was the person best-placed to answer the committee’s questions, it looks bad, like you think your company is above governments.

The difficulty that has faced would-be Internet regulators from the beginning is this: how do you get 200-odd disparate cultures to agree? China would openly argue for censorship; many other countries would openly embrace freedom of expression while happening to continue expanding web blocking, filtering, and other restrictions. We’ve seen the national disparities in cultural sensitivities played out for decades in movie ratings and TV broadcasting rules. So what’s striking about this declaration is that nine countries from three continents have found some things they can agree on – and that is that libertarian billionaires running the largest and most influential technology companies should accept the authority of national governments. Hence, the group’s first stated principle: “The internet is global and law relating to it must derive from globally agreed principles”. It took 22 years, but at last governments are responding to John Perry Barlow’s 1996 Declaration of the Independence of Cyberspace: “Not bloody likely.”

Even Allan, a member of the House of Lords and a former MP (LibDem, Sheffield Hallam), admitted, when Collins asked how he thought it looked that Zuckerberg had sent a proxy to testify, “Not great!”

The governments’ principles, however, are a statement of authority, not a bill of rights for *us*, a tougher proposition that many have tried to meet. In 2010-2012, there was a flurry of attempts. Then-US president Barack Obama published a list of privacy principles; the 2010 Computers, Freedom, and Privacy conference, led by co-chair Jon Pincus, brainstormed a bill of rights mostly aimed at social media; UK deputy Labour leader Tom Watson ran for his seat on a platform of digital rights (now gone from his website); and US Congressman Darrell Issa (R-OH) had a try.

Then a couple of years ago, Cybersalon began an effort to build on all these attempts to draft a bill of rights hoping it would become a bill in Parliament. Labour drew on it for its Digital Democracy Manifesto (PDF) in 2016 – though this hasn’t stopped the party from supporting the Investigatory Powers Act.

The latest attempt came a few weeks ago, when Tim Berners-Lee launched a contract for the web, which has been signed by numerous organizations and individuals. There is little to object to: universal access, respect for privacy, free expression, and human rights, civil discourse. Granted, the contract is, like the Bishop of Oxford’s ten commandments for artificial intelligence, aspirational more than practically prescriptive. The civil discourse element is reminiscent of Tim O’Reilly’s 2007 Code of Conduct, which many, net.warsincluded, felt was unworkable.

The reality is that it’s unlikely that O’Reilly’s code of conduct or any of its antecedents and successors will ever work without rigorous human moderatorial intervention. There’s a similar problem with the government pledges: is China likely to abandon censorship? Next year half the world will be online – but alongside the Contract a Web Foundation study finds that the rate at which people are getting online has fallen sharply since 2015. Particularly excluded are women and the rural poor, and getting them online will require significant investment in not only broadband but education – in other words, commitments from both companies and governments.

Popular Mechanics calls the proposal 30 years too late; a writer on Medium calls it communist; and Bloomberg, among others, argues that the only entities that can rein in the big technology companies is governments. Yet the need for them to do this appears nowhere in the manifesto. “…The web is long past attempts at self-regulation and voluntary ethics codes,” Bloomberg concludes.

Sadly, this is true. The big design error in creating both the Internet and the web was omitting human psychology and business behavior. Changing today’s situation requires very big gorillas. As we’ve seen this week, even nine governments together need more weight.

Illustrations: Zuckerberg’s empty chair in the House of Commons.