Don't Miss
Home / Games for Good / Can Games help us to make the word a better place? 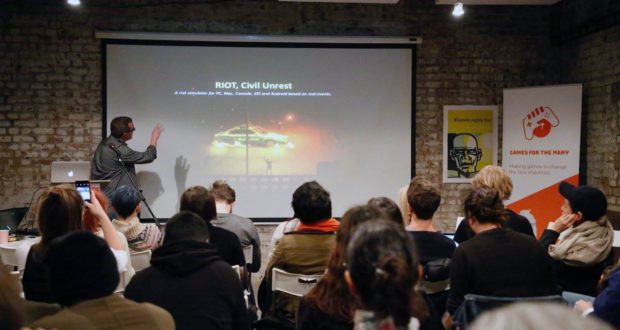 Can Games help us to make the word a better place?

Over 2.2 bln people  world-wide will be playing games in 2018. A hit game is fun but also an opportunity for deep learning and transformative experience. As technology, politics and urbanisation makes our lives more complex, can games can help us to learn faster about things we need to know to thrive in this new post-truth world?

On a 25th January Cybersalon.org hosted a panel on how game creatives and social innovators put spotlight on real-world challenges like state and work surveillance, fake news and anti-democratic practices of modern governments while providing inspiring game experience.

Use simple game mechanics to engage and reward

Chair Rosa Carbo-Mascarell – London-based game designer and Corbyn Run game co-author , Creative Director for Game Jam and Games For The Many explained how as simple mobile game has achieved 150,000 downloads. During UK General Election campaign in 2016 the aim was to mobilise young people to take interest in elections (UK is notoriously low in voting participation of under 35 year olds). The game was inviting the player to be Jeremy Corbyn running and bashing bankers on the heads, with a successful hit each banker releasing bags of dollars out of their pockets. Since the financial crisis bankers have not been seen accepting their fair share of repayments and the game became a hit with young people.

You too can be the Fake News Master!

Amanda Warner  @Amanda_Warner of –”Fake It to Make it” fame is an US-based web games author and interactive designer interested in fighting propaganda and confusion in Mainstream Media in US and beyond (joined us via Skype from US). She wanted to stop her uncle Jo from sharing Fake News without checking facts first. Her game mechanics are based on the concept that to win, a player had to create and promote Fake News. The game hit a sweat spot and so far was played over 90,000 times.

Amanda’s aim was to explain to her audience what is Fake News, how do you make it and how do you make money making it. To begin with she urges developers to “define what you want your audience to learn, make it clear and allow them to experience the outcomes in a simple way.”

She has introduced the context of countries where cost of living is lower than in US (like in Macedonia) and where teens can make a buck or two just by registering a domain like Washingtonian News that looks similar to a real newspaper.

Then writing stories with conjecture, hyperboly or just simply exaggeration to produce outrage counts is a win in her Fake It To Make It Game. She introduces the concept of being paid more if the title is raising outrage. Clicks and shares go up with the level of outrageousness.

It is actually quite simple once you get the hang of it and you can be your own Trump-for-The-Day spouting out ‘Immigrants eat your cats’ kind of stories in exchange of tons of Likes and Shares.

For the makers – Amanda has included a clear Outcome Map that allows the designer to concentrate on the learnings that we want the user to experience and retain. Less is more here, a few deep, experience-based learnings are sufficient to drive a point or two home. Don’t make it a novel, games are still at early days of maturity and simplicity is the king.

Amanda notes that it may help ‘uncle Jo’ to understand why and who would have a motivation to create harmful fake news for only a buck or two.

It took over 3 years to Rich Metson’s team to create OFF GRID THE GAME.

Rich Metson – game designer and OFF GRID co-author invites the player on an adventure where the game reveals the world of surveillance and engages player to explore the avoidance and defense techniques.

The game is roughly based on a character that has to exchange PGP keys and solve problems caused by being under surveillance. Rich’s team were keen for other countries, not just UK to be able to re-create their own experience of living under surveillance so his game is mode-able. It will allow a simple re-creation with local colour and culture of what it means to leave under omnipresent eye of the Big Brother.

The game is not just recreating morally oppressive surveillance state but is also very beautiful aestheticaly. Rich made a comment that they controls are kept simple to allow newbies to learn fast and enjoy the game, while experiencing many subtle and nuanced levels of being a surveillance victim.

The release will be in late 2018 as Rich’s team is near finding a sponsor for the final leg of the dev.

Rioting in style or AI for Good

Games are reclaiming AI and deploying it to model behavior of each individual game actor.

Ben Greenaway – Cybersalon’s games reviewer discussed Anders Norén’s Riot – Civil Unrest which gives a choice to the player, either be a rioter or Police commander. Ben examined the impact of AI where the individual level of fear and stress is calculated for each of the police characters in the game. When they are frightened and stressed, the police may not follow commands and it is easy to see how the anxiety rising would make life of the Riot Police commander much harder. Same goes for AI calculating the responsiveness of individual rioters, when excited, they may behave in a undisciplined way and chose wrong path. In this real-time strategy game based on real riots in 4 places (Egypt, Tahir Square amongs them) where the player witnesses emergent behavior and viral responses of the crowd under groupthink context.

The game is based on the author’s individual experiences of riots and of being closed up in a police ‘kettle’. He has worked out the key levers in a riot and the importance of defending the position peacefully. Police wants to evict rioters, but rioters can make friends with the police and by dialogue, form new bonds.

Interestingly, the choices of number of rioters available are determined by the cost of their gear – number of rioters goes down the more sophisticated and expensive is their riot armour. If you want them in full helmet and body protection, then an organizers can only afford a handful. But they are more efficient and longer lasting under the ‘kettle’ scenario so it may be a choice worth taking. Turns out that Riot organizing is more like a business, who knew?

Ben notes that the game examines what does it mean to have a player agency in a historical event. Do we just replay the history? Do we seek to create alternative histories? There is a rich vain of literature on alternative histories (link) but not many on games- an area of ‘what if’ that games are ideally poised to exploit. Riot Game is not re-enactment, it is a simulation that invites to explore many alternative scenarios.

Interesting thing about Riot is that it mixes virtual and real. It has baked-in characters that really took part in riots, like Wonderwoman in Venezuela or a guy dressed up as Santa Clause who wore a body armour under his red jacket and excelled in charging at police. He makes a re-entry as a character in Riot. Ben commented that the press followed the Wonderwoman during riots and her reai international Instagram followers helped to raise the profile of the Venezuelan riots to the wider audience.

Ben also notes that gaming is about learning, repeating and improving the gamer’s paths to excel every time and improve. Simulations are very useful tools to learn, improve and work out best strategies, just like Tom Hunks in GroundHog Day. His small criticism of Riot was related to the ramping up of level of difficulty but the game is still in beta so play and leave feedback to make it better.

Simon Sarginson – digital artist and Cybersalon’s Create technologist reviewed the game “Orwell” by Osmiotic Studios from Hamburg. Authors of “Orwell” game created the persona of Cassandra Watergate and in the game the player is a contractor (not unlike original Snowden’s job) who has to map Cassandra’s network. The process develops slowly and initially the feeling of being intrusive and upsetting her privacy turns into just a mundane beaurocratic process of trace-and-track, slowly fishing out her network nodes and re-constructing her entire life-long social map. The game reveals how mundane and easy to get used to is the activity of the surveillance agent.

It also demonstrates the power of the surveillance agent as many details of the victim’s life are ambiguous. It is the agent’s decision to pick some, but not other facts and interpret them as points that may send her to prison or not.

Being in the hand of subjective judgement of security agent is something that I remember well from my childhood in communist Poland and the fear of the agent looking at your file on a bad day, making a decision that may impact victim’s life for ever often a matter of pure luck.

The agent has power but his power is uncomfortable to him, as he is increasingly aware how subjective are his decisions, and that he is just a pawn in the hands of evil.

Simon then moves on to review of Papers Please. The premise of the game is that you have won a job in a lotter –very rare to have a job in Papers Please society- but it is not a good job as the player won a job as a custom officer at a non-descript Eastern European border.

The dilemma of the custom officer is that many people passing may not have the right papers to cross the border, but it is clear that if they are turned away, many may get killed back home. However, the stakes are high as the border control agent pays fine if the waves thru the wrong people.

Fine means limited food, hunger for his own family, so eventually the scores will go up with the border control agent turns away more people than lets thru. The ambience of the game is stifling, moral dilemma unresolvable and the game has a sense of inevitability and a dark ending – again a feeling that is distinctly familiar to anyone who was brought up in Eastern Europe.

What are games for?

From FakeNews mastering to living thru Eastern European border terror, the speakers shared the view that games let us explore two sides of each story. Ambiguity, complexity, hidden agendas all can be revealed thru the gaming better than any other medium.

Maybe we don’t have yet the powerful story telling methods of books or movies, but nothing can replace first-person experience and that where Marshall McLuhan’s “the medium is the message” can really come into proverbial play.

Listen to the full event on Soundcloud

2018-01-30
Karolina Janicka
Previous: Bodies in the clouds – Net.Wars by Wendy Grossman
Next: YouTube – The Dark Side