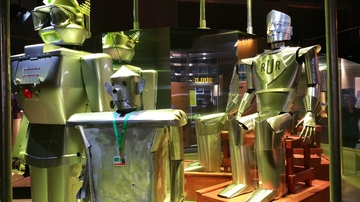 “The robot”, a friend used to call his telephone answering machine. “The robot”, another friend calls his automated tea-maker. For its 2017 robot exhibition London’s Science Museum elected to focus on robots that “take a human form or behave in a human-like way”, in the catalogue’s phrasing – The Verge has pictures. Focusing on form rather than intelligence helpfully avoids the mundane and the formless: the Roomba, search engines, and those petty, bureaucratic automatic faucets. It also eliminates pets like the Aibo, drones and other unmanned autonomous vehicles, and the factory-worker industrial robots that populated a prior Science Museum robot exhibition – 1995, I think.

Two points stick in my mind from 1995. The robots were large, impressive, and Japanese, and performed their jobs on a schedule. One, designed to paint automobiles, wore an artist’s beret. Second, they were all behind glass. In Japan, these same robots were out in the open. Here in the UK, the authorities panicked: what if one got loose and hurt people? So they were confined inside big glass boxes and visitors were kept well back, as if the robots were giant scorpions poised to attack.

What the 2017 definition does embrace is movie stars: the T-800 from the Terminator movies and Maria from Fritz Lang’s 1927 spawned-a-million-sf-movies classic, Metropolis. The limitations of this approach are subtle: Cynthia Breazeal, featured on video explaining her work at the MIT Media Lab, has has saidthat her inspiration to go into robotics was falling in love with R2D2 when she was eight. Not at all humanoid, designed for comedy over function, yet stole the show from its cranky bipedal companion. A few years ago, at We Robot2015, R2D2 creator Tony Dyson commented that after hundreds of similar stories from robotics engineers, “No one ever fell in love with C3PO.” But: not qualified for inclusion. I was also sorry to see that Shadow Robot got so little notice. Its founder, Richard Greenhill is your classic English eccentric, pouring his mind, heart, and life into trying to build a general-purpose robot in an attic.

The goal, however, was trying to get at the human response to robots and our millennia-old desire for artificial companions. As far back as the third century BC, the ancient Greeks, whose power sources were limited to sun, wind, water, and gravity, were trying both to automate function and copy human form. It’s from their work that the medieval clockwork automata in this exhibition logically descend. There’s a second tributary in the Jewish mythology surrounding the Golem, as seen in last November’s exhibition at Berlin’s Jewish Museum. A humanoid being formed from inanimate matter such as clay and unable to speak, in some versions the Golem was created to protect the Jewish community. Movie robots are still recognizable as descendants.

The Science Museum skipped the Golem; arguably better befitting our times, it focused on mechanical antecedents. The body as machine section strikes a reminiscent chord: as a child I had a Visible Man, an 18-inch-tall rendering of the human body and its organs inside a transparent skin; you assembled it from bags of plastic parts. I read now that the Visible Man and (later) Visible Woman toys were anatomically correct, a detail I don’t recall; what I remember is that their 3D puzzle quality made them a great way to learn human anatomy. 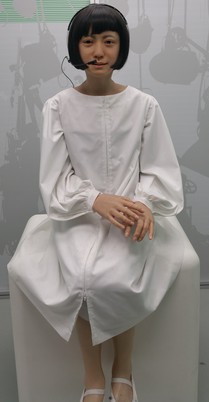 Most of the completed robots on display – there are also prototypes-in-development – were designed either to be watched and admired, like the T-800 or Fritz Lang’s Maria, or for a particular function, like the Baxter industrial robot. A few are both, like the Kodomoroid Japanese TV newsreader, a rendering of a young woman in a white dress befitting a first communion. This particular robot bothers me, not because it’s so humanoid but because some people will tend to call it “she”, a genderizing issue the exhibition touches on elsewhere. People feminize boats and fiddles, too, but there’s no chance that these will be taken as models whose form actual women should aspire to emulate. As technical wizards perfect their renderings, that risk exists for all genders. Even with a white dress, folded hands, and a projection-ready expression, it’s still a fancy hammer.

It’s definitely a pity that more interaction isn’t possible. The Telenoid, for example, is a telepresence device; sitting on a couch in a glass cage makes its qualities hard to appreciate. However, small children may notice that they can interact with the little boy-styled Zeno R25. Even through glass, when you look it in the eye it twitches, then mimics your head movements. Supposedly, it reads stories and tells jokes (it’ll be here all week!).

This is where the 2017 and 1995 exhibitions merged: most of the robots were still behind glass or displayed out of reach. A rare exception was Aldebaran’s emotion-recognizing Pepper, which was noticeably a little-kid magnet – close enough to their size and one whose shiny white surface they were able to touch. The biggest, most notable difference in those 20-plus years, therefore, is this: then, the robots were put behind glass to protect *us* (or at least, the Science Museum from legal action); now, they’re behind glass to protect *them*. Still alien, after all these years.

The exhibition ends September 3, so you still have time.