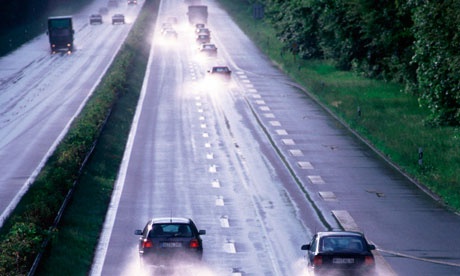 The Future of Traffic Enforcement?

One month ago, Robert Goodwill, Britain’s Road Minister announced a record rise in deaths on UK roads. Subject to government austerity measures and funding reforms, traffic policing has suffered a national 12% cut in the number of enforcement officers on Britain’s highways, with local figures peaking with cuts as much as 40%, according to road safety charity Brake. With fewer patrol cars on Britain’s roads, numbers of road deaths and significant injury have spiked, prompting warnings like that of AA president Edmund King, of police forces “retreating from the nation’s motorways.” As increasing numbers of vehicles take to the roads, we are forced to question how might authorities hope to cope with the grim realities of dwindling state resources whilst expecting to keep people safe on the roads – one potential solution lies in the emerging technological revolution of the Internet of Things and the rise of the connected car.

The Internet of Things promises to revolutionise everyday life, embedding and imbuing everyday objects and the world around us with sensors, software and electronics. Through machine-to-machine communication and automation and advanced analytics, we are able to understand and scrutinise our environment and the processes which surround us in ways never before conceived. Use cases range from high level analysis allowing automated condition monitoring of critical engine parts, giving engineers the tools to reduce costly operational downtime to embedding real-time sensors in bridges to predict stresses and flooding. Beyond the hype however, the Internet of Things brings the internet to the everyday. There are clear problems to be solved and use cases for such technologies in the realm of road safety.

This is where eCall comes in. First proposed in 1999, eCall is a European Commission initiative coming into force in late 2017, making mandatory the deployment of internet-connected sensors into cars that enable emergency services to be immediately contacted and requested, automatically, after a serious road incident. European Commission VP for Digital, Neelie Kroes, argues “EU-wide eCall is a big step forward for road safety. When you need emergency support it’s much better to be connected than to be alone.” So – with the infrastructure slowly coming into place via eCall and other platforms, what’s to prevent us using the same technology to better enforce existing road traffic law?

It is easy to conceive of such a system. A car fitted with such sensors travels over the maximum speed limit in any given area, the system de-anonymises the driver data and sends it securely to local law enforcement. For one, this system would be a technical challenge; one would have to build a reliable and corroborative system to account for the provenance of such data being sent and actioned upon. Collaborative data capture of speeding incidents could be identified in the connected-vehicles surrounding the incident through vehicle-to-vehicle communication (V2V) and vehicle-to-infrastructure (V2I) technologies which are currently under development by various groups, namely the U.S Transport Dept.

But what about data privacy? Looking back to eCall, the system has been given the green light by the European Commission on the express condition that the sensor-equipped vehicles will not push data to external servers except in the case of a crash, or by the actions of the driver, to contact the emergency services (Note, EU vs. Big Brother Watch). A traffic enforcement application could operate along similar lines, anonymising data except in the case of a criminal act, in which it is then pushed securely to police servers. Bearing in mind that by the inception of such a system, V2V and V2I communication and road safety systems based in the vehicle will likely be publishing and ingesting sensor data in real time to the local network. What are the security implications of these emerging infrastructure designs? Are the trade-offs between connected car tracking and greatly increased road safety justified?

Importantly, as opposed to the real or imagined threats tackled by traditional state surveillance and tracking systems that we are used to scrutinising, this technology  is attempting to solve a very real problem, cars are dangerous and the resources and capacity of traffic enforcement is decreasing in real terms. The latest car models are fast becoming internet-connected, packed with sensors and data processing systems, a trend unlikely to falter. Simon Davies of Privacy International states that the coming together of car tracking data and mobile phone data creates a recipe for an ‘almost infallible surveillance system’. Whilst true, this highlights two things, that highly granular surveillance networks already exist and that like the need for corroborative data in the anti-speeding IoT system I set out to propose, these systems are becoming distributed, which has yet further implications on data privacy. There is a nascent but growing trend, from connected cars forming V2V networks, to wearable-enabled workers in factories that – of instead of sensor-enabling and network enabling the environment, we put the sensors and network nodes on the people and things already moving through it.

Through secure and reliable Internet of Things enabled systems there is a very real promise in building safer road and traffic systems, reducing costs and assisting local law enforcement with next generation technologies and most importantly reducing road deaths and injury. As U.S Transport Secretary Anthony Foxx remarked, “This technology could move us from helping people survive crashes to helping them avoid crashes altogether – saving lives, saving money.” What role and consideration privacy has to play in this emerging landscape we are only just glimpsing.

The views and opinions expressed on this web site are soley those of the author.