Jaron Lanier gets critiqued via SMS

Jaron Lanier, the inventor of the Data Glove and Virtual Reality guru came to speak at Cybersalon in 2001, Lanier, also a musician, claims the Sony AIBO robot dog, which had recently come out then, is “a piece of shit” and picks it up breaking it, live in front of 300 people. The viewers retaliate, sending live SMS, to a large screen behind Jaron’s head.

The text you see on screen are real comments by the audience…boo to Jaron!

Jaron is on stage with Irene McAra-McWilliam- then newly-appointed Head of
Computer Related Design at the Royal College of Art and former head of
R&D at Philips Design and Tim Parsey- VP for Consumer Experience
Design at Motorola and ex-Apple. 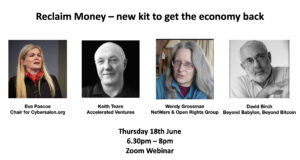