Don't Miss
Home / net.wars / The opposite of privilege – Net.Wars by Wendy Grossman The opposite of privilege – Net.Wars by Wendy Grossman

A couple of weeks ago, Cybersalon held an event to discuss modern trends in workplace surveillance. In the middle, I found myself reminding the audience, many of whom were too young to remember, that 20 or so years ago mobile phones were known locally as “poserphones”. “Poserphone” because they were still expensive enough recently enough that they were still associated with rich businessmen who wanted to show off their importance.

The same poseurship today looks like this: “I’m so grand I don’t carry a mobile phone.” In a sort of rerun of the 1997 anti-internet backlash, which was kicked off by Clifford Stoll’s Silicon Snake-Oil, all over the place right now we’re seeing numerous articles and postings about how the techies of Silicon Valley are disconnecting themselves and removing technology from the local classrooms. Granted, this has been building for a while: in 2014 the New York Times reported that Steve Jobs didn’t let his children use iPhones or iPads.

It’s an extraordinary inversion in a very short time. However, the notable point is that the people profiled in these stories are people with the agency to make this decision and not suffer for it. In April, Congressman Jim Sensenbrenner (R-WI), claimed airily that “Nobody has to use the internet”, a statement easily disputed. A similar argument can be made about related technology such as phones and tablets: it’s perfectly reasonable to say you need downtime or that you want your kids to have a solid classical education with plenty of practice forming and developing long-form thinking. But the option to opt out depends on a lot of circumstances outside of most people’s control. You can’t, for example disconnect your phone if your zero-hours contracts specifies you will be dumped if you don’t answer when they call, nor if you’re in high-urgency occupations like law, medicine, or journalism; nor can you do it if you’re the primary carer for anyone else. For a homeless person, their mobile phone may be their only hope of finding a job or a place to live.

Battery concerns being what they are, I’ve long had the habit of turning off wifi and GPS unless I’m actively using them. As Transport for London increasingly seeks to use passenger data to understand passenger flow through the network and within stations, people who do not carry data-generating devices are arguably anti-social because they are refusing to contribute to improving the quality of the service. This argument has been made in the past with reference to NHS data, suggesting that patients who declined to share their data didn’t deserve care. 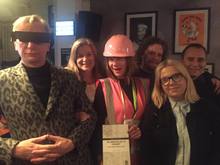 Today’s employers, as Cybersalon highlighted and as speakers have previously pointed out at the annual Health Privacy Summit, may learn an unprecedented amount of intimate information about their employees via efforts like wellness programs and the data those capture from devices like Fitbits and smart watches. At Cornell, Karen Levy has written extensively about the because-safety black box monitoring coming to what historically has been the most independent of occupations, truck driving. At Middlesex Phoebe Moore is studying the impact of workplace monitoring on white collar workers. How do you opt out of monitoring if doing so means “opting out” of employment?

The latest in facial recognition can identify people in the backgrounds of photos, making it vastly harder to know which of the sidewalk-blockers around you snapping pictures of each other on their phones may capture and upload you as well, complete with time and location. Your voice may be captured by the waiting speech-driven device in your friend’s car or home; ever tried asking someone to turn off Alexa-Siri-OKGoogle while you’re there?

For these reasons, publicly highlighting your choice to opt out reads as, “Look how privileged I am”, or some much more compact and much more offensive term. This will be even more true soon, when opting out will require vastly more effort than it does now and there will be vastly fewer opportunities to do it. Even today, someone walking around London has no choice about how many CCTV cameras capture them in motion. You can ride anonymously on the tube and buses as long as you are careful to buy, and thereafter always top up, your Oyster smart card with cash. But the latest in facial recognition can identify people in the backgrounds of photos, making it vastly harder to know which of the sidewalk-blockers around you snapping pictures of each other on their phones may capture and upload you as well, complete with time and location.

It’s clear “normal” people are beginning to know this. This week, in a supermarket well outside of London, I was mocking a friend for paying for some groceries by tapping a credit card. “Cash,” I said. “What’s wrong with nice, anonymous cash?” “It took 20 seconds!” my friend said. The aging cashier regarded us benignly. “They can still track you by the mobile phones you’re carrying,” she said helpfully. Touché.